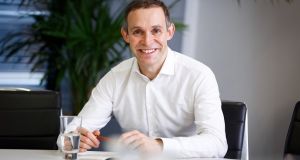 Paddy Power Betfair’s new chief executive, Peter Jackson: the move to the head of the gambling giant represents a big step up for the 42 year old

It’s a fresh start to the new year for former Worldpay UK boss Peter Jackson, who is taking up his new job as chief executive of Paddy Power Betfair on Monday.

Mr Jackson assumes the role from Breon Corcoran, who stepped down from the board yesterday, and tweeted Monday that he was “excited to wake up in Dublin for my new job”.

The move to the head of the gambling behemoth represents a big step up for the 42 year old, who was only appointed head of the British business of the payment processing group in March 2017. Prior to that, he had spent seven years as chief executive of foreign exchange Travelex.

Mr Jackson has some difficult shoes to fill. The departure of the well-respected Mr Corcoran, who led the successful £7 billion merger of Paddy Power with Betfair in 2016, took everyone by surprise.

Mr Jackson’s arrival in Dublin, where he will be based, coincides with a decision from Morgan Stanley to cut its recommendation on the gambling giant to underweight, the first time it has taken a negative stance since the company was formed by a merger almost two years ago.

Morgan Stanley analyst Ed Young told clients on Monday that the company’s “premium valuation” may soon come under pressure. His price target of 7,500 pence is almost 10 per cent below the average and implies about 14 per cent downside from the current price.

Shares fell as much as 2.7 per cent on Monday.

Mr Young said the incoming chief executive needed to address “some major strategic issues,” and there are “few silver linings” from regulatory changes in Australia. While Paddy Power Betfair has “strong technology and a robust balance sheet”, the analyst said expectations for a significant acceleration in online revenue growth after completion of a project to put customer interfaces onto a single platform “may not materialise”.