‘Look after your staff. If you have happy staff, they are much more likely to take good care of your customers’ 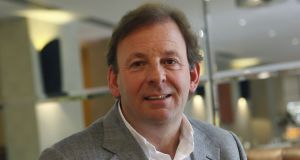 Michael Kelly: “We didn’t recognise the important role social media can play in increasing awareness of a business.”

Michael Kelly is managing director of Glandore, which provides serviced private office and hot-desking space to more than 1,600 clients in Dublin and Belfast. Glandore also owns Suesey Street restaurant as well as the No. 25 private dining facility on Fitzwilliam Place in Dublin.

We provide more than space. We set out to connect our members with others in the buildings as well as service providers that they may require, such as tax or accountancy services. We look to support our members with an integrated service. We also have a wellness programme for members, which seeks to connect people through our events programme.

The best piece of business advice you’ve ever received?

To look after your staff. If you have happy staff, they are much more likely to take good care of your customers. I mean in terms of paying competitive salaries, but also in terms of listening to them, involving them and making sure that they are recognised for the work they do.

I worked for a company called Johnson Brothers for about 14 years and David Johnson was the MD. I would say that he was my mentor. It was a family business and he also took the view that it was important to look after your staff.

We were slow to embrace social media and that was a mistake but in the past two years we have made real progress. We have three main brands – Glandore, Suesey Street and No. 25 – and I think, if you look at social media, all three brands are now prominent. I think it’s important not to hide your light under a bushel and, for a while, we didn’t recognise the important role social media can play in increasing awareness of a business. When we heard Suesey Street being described as a “hidden gem”, it was a real eye-opener for us.

What is your major success to date?

We have built three fine brands. Glandore is recognised as a premium brand in flexible office space in Dublin and Belfast. The restaurant is also now well-recognised as well as No. 25’s private dining space. We are working on leveraging each of the three businesses in tandem with each other. It is also a real joy to have each of my three daughters working in the business.

Who do you most admire in business?

I admire Michael O’Leary. I think he has done a phenomenal job in creating a business that is worth about €20 billion. I admire his energy and his irreverence, and I also admire his Pauline conversion to improved customer service. I was at James Osborne’s commemoration a few weeks ago and Michael gave a phenomenal eulogy. The man has feelings too. He’s a hell of an operator.

Based on your experience in the downturn, are the banks in Ireland open to SMEs?

No. They prefer to lend money to people who don’t want it and are very cautious about lending money to people who do want it. As a result, small businesses and individuals are paying far higher interest rates than they should be and being diverted to other sources of funds that charge phenomenal rates.

What one piece of business advice would you give the Government to help stimulate the economy?

I’m not sure it’s stimulation that is needed but I think a major issue is the housing problem. They should get the local authorities to build houses and it should have been done long ago. They need to build sufficient houses and tax vacant sites at a penal level to bring them back into production.

What is the greatest challenge you’ve had to face in business?

The recession that took place from 2009 to 2014 was very, very, very difficult. Our rates per desk dropped by 50 per cent. Demand continued to be quite good but because there was more space available, the rates had to drop and we had to cut our costs to the bone. In 2009, the market collapsed. The music stopped, for want of a better phrase. Occupancy became a much more significant factor. We had to focus on having our building filled because people were paying less. You were working much harder and you weren’t getting the return. It was very difficult but we survived.

I see a strong future for the business. We have 1,000 desks in Dublin and 600 in Belfast. Occupancy is high and rates have recovered. There is an increasing demand for flexible office space. Many businesses require flexibility and scalability and our business provides that.

When Facebook came to us, they had two people and grew with us to about 50 people. We provide companies such as Facebook, Dropbox and Twitter the opportunity to land and expand.