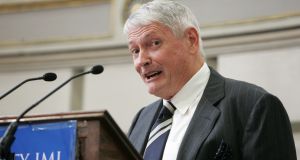 John Malone’s Liberty Global is nearing a deal to sell its Austrian business to Germany’s Deutsche Telekom for about $2 billion in a disposal that opens the door for the US company to reopen merger talks with the UK’s Vodafone. Photograph: Frank Miller

John Malone’s Liberty Global is nearing a deal to sell its Austrian business to Germany’s Deutsche Telekom for about $2 billion in a disposal that opens the door for the US company to reopen merger talks with the UK’s Vodafone.

The discussions between Liberty Global and Deutsche Telekom over the unit are very advanced, according to people briefed on the negotiations, who added that a deal is likely to be announced in the coming days.

For Deutsche, the purchase would be its second European deal in six days after spending much of the year in unsuccessful negotiations to combine its US business T-Mobile with SoftBank’s Sprint.

A deal would strengthen Deutsche Telekom’s Austrian T-Mobile subsidiary against much larger Telekom Austria, which is the incumbent, and Three, which became the country’s second-largest mobile player last year.

Liberty Global was also considering selling its Swiss assets but has decided to hold on to its business there, one of the people briefed on the negotiations said.

Liberty Global’s decision to divest its Austrian business is part of a broader effort to restructure its business in order to prepare for a negotiations with UK-listed Vodafone about combining to create a global telecom and cable company worth about $175 billion, people close to the company said.

Vodafone and Liberty Global are not currently holding merger talks but both sides are constantly exploring the possibility, especially since they combined their operations in the Netherlands in 2016 to challenge the incumbent operator KPN.

The two companies also held talks over an asset swap in 2015 but failed to reach an agreement over valuations.

Vodafone chief executive Vittorio Colao said in February that he was still in theory interested in linking his UK-based telecoms group with the US-based owner of Britain’s Virgin Media and other European assets.

“It is still an attractive combination. The deal is not on the table. But as a project, it’s an interesting project,” Mr Colao said at an industry conference in Barcelona in February.

The Italian-born head of Vodafone said putting together Liberty Global with Vodafone would create a new global competitor that could challenge national incumbents such as Deutsche Telekom and BT.

“If Europe wants the creation of real alternatives to incumbents, Vodafone and Liberty are the only two guys in town,” he added at the time.

Liberty Global has also been working to split off of its Latin American and Caribbean business, a transaction that is set to take place around the end of the year. – Copyright The Financial Times Limited 2017