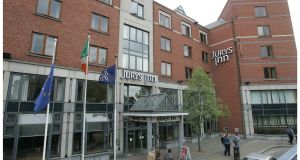 Dublin-headquartered hotel group Amaris Hospitality, which runs Jurys Inn and other hotels in Ireland and Britain, recorded an operating profit of £44.6 million (€50.6 million) in 2016. Revenues rose 15 per cent to £453.1 million during the year.

The 74-hotel group, owned by US private equity group Lone Star, had finance costs of £151 million, which transformed the operating profit into a pre-tax loss of £106 million. After an income tax credit, the result for the year was a loss of almost £95 million.

However, the group said it secured a strong underlying performance in what it described as a “transformative year”. The operating profit of almost £45 million compared to an operating loss of £31 million in 2015.

Amaris is led by chief executive John Brennan, the former chief executive of Jurys Inn. It is headquartered at the Irish chain’s old Dublin offices, although the company reports its earnings in sterling.

In a statement accompanying the accounts, Mr Brennan said weaker sterling was “driving an influx of tourism and spend into the UK”, where the majority of its hotels are located.

Lone Star is in the process of selling the 36-strong Jurys Inn chain, with Swedish hotel group Pandox recently emerging as the frontrunner for the business.

The company highlighted “continued strong growth” in the Jurys Inn business, which recorded a record five million guest stays during 2016.

Some 237 rooms were added to the Jurys Inn portfolio in 2016, helping these hotels increase revenues 38 per cent to £211.3 million.

“While there’s uncertainty around the ultimate impact of Brexit, thus far, trading performance has been very positive,” Mr Brennan said.

“More broadly, we are confident about the future prospects for the hospitality sector on the basis of a largely positive economic outlook, along with strongly supportive business and leisure travel dynamics in the UK and Ireland.”

In Ireland, Amaris Hospitality also operates the Hilton Garden Inn in Dublin (previously the Jurys Inn Custom House hotel). The accounts show that £35.9 million of its turnover comes from the Republic, up from £25.3 million in 2015.