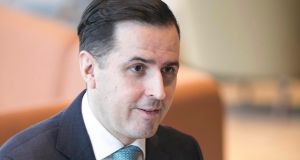 Pointing to the record levels of foreign direct investment lured to Ireland over the last five years, IDA chief executive Martin Shanahan, above, suggested companies don’t seem very bothered by what has been done so far

At its results briefing on Wednesday morning, IDA Ireland chief executive Martin Shanahan was keen not to overplay the risks to the State’s investment strategy of corporate tax reform.

Ireland, under pressure from a disapproving European Union led by France and Germany, has in recent years watered down certain elements of its tax-avoiding toolbox made available to incoming multinationals. It was recently last call for Google’s favoured Double Irish move, for example.

It is on supranational moves to co-ordinate on corporate tax, however, where Ireland has most to lose. The Organisation for Economic Co-Operation and Development (OECD) has proposed a number of measures, including changes to the calculation of tax bases and possible global minimum rates.

As Goodbody economist Dermot O’Leary pointed out later on Wednesday, the OECD tax reforms due to be finalised in the summer are “the key risk” for Ireland in the coming years: “Ireland achieved its successes last year in spite of rising protectionist threats, but the outcome of the deliberations by the OECD will have more direct implications for Ireland.”

But even if the final agreement isn’t great for Ireland’s ability to conduct our usual corporate tax gymnastics, the ultimate impact could still be years away. As both O’Leary and Shanahan pointed out, it will take a long time for each state to transpose whatever is agreed into law.

And then there is the weight carried by the multinationals themselves. In an unusual acknowledgement of the realpolitik of the situation, Shanahan recalled that the biggest multinationals are “significant players [that will] seek to influence the OECD outcome through the normal channels internationally”.

The biggest ones domiciled here will likely be humming a similar tune to the State that fetes them.