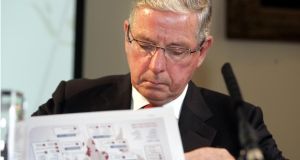 T5 Oil & Gas executive chairman Pat Plunkett will have much to do to turn around the fortunes of the company this year. File photograph: Dara Mac Dónaill

While oil stocks globally have received a boost in the first few days of trading of the year as tensions in the Middle East have lifted prices, many Irish followers of the sector are still licking their wounds following a tumultuous 2019.

Irish-founded Tullow Oil stood out as the worst-performing stock on the FTSE 350 last year, slumping almost 71 per cent as it slashed production forecasts and suffered exploration disappointments in South America.

Providence Resources, the only company to have found oil off Ireland’s coast following decades of drilling, plunged 64 per cent to count as the weakest Iseq stock as would-be Chinese backing for the project proved to be a mirage.

Spare a thought for Pat Plunkett, chairman of Tullow between 2000 and 2011, during which time the company grew from a small cap sucking the last pockets of gas out of North Sea fields to become a multi-billion pound business and a major player in Africa.

While Plunkett’s immediate challenge is finding a new CEO, he must also ensure that Providence finally secures a reliable partner for Barryroe to deliver for investors.

Plunkett’s day job as executive chairman of fledgling Africa-focused oil explorer T5 Oil & Gas is no less daunting. The private company, backed mainly by Irish investors, said in its latest annual report, signed off by the board days before Christmas, that it needs to find fresh investment to close off a key Gabon deal and ensure it remains a going concern this year.

Having abandoned a $45 million initial public offering, the company has set its sights on a flotation in the first half of this year, with a major cornerstone investor. To date, however, its main target – an unnamed Asian party – has been reluctant to sign up. Plunkett will have his work cut out to turn around the fortunes of both Providence and T5 this year.