Despite the obituaries, the Orla Kiely brand is far from dead

Cantillon: The voluntary insolvency allows the company to focus on licensing 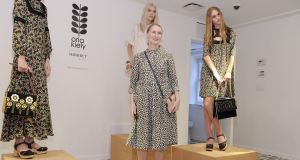 While the closure of its retail operations may be a surprising turn, the Orla Kiely brand is certainly not dead

The fanfare and disappointment in some quarters about the closure of Kiely Rowan Plc, the retail and wholesale fashion business company behind Orla Kiely, was perhaps overdone.

The business said its retail stores had all been closed, leading one newspaper to refer to the “collapse” of Orla Kiely’s “retail empire”. That’s also overdoing it. The business had a small number of stores and, with more than £8 million (€9 million) in turnover, it can hardly be described as an empire.

In effect, the business has chosen to focus on licensing – a common feature of the fashion world exemplified by Paul Costello who sells his wares in Dunnes Stores.

While this may be a surprising turn, the Orla Kiely brand is certainly not dead.

In an interview with this newspaper in May, Dermott Rowan, managing director and co-owner of Kiely Rowan Plc, noted there were “winners and losers in retail”, adding that his company’s Covent Garden store was “doing really well”. Even though he believed at that time the internet was “where we’re going”, he was positive on the brand’s prospects.

So the closure of the retail arm of Orla Kiely is all the more surprising when you consider that. Looking at its accounts, the surprise starts to wane as the benefit of hindsight sets in.

The business had a significant debt burden exceeding £2.8 million, relatively high rental costs which have risen, and was barely profitable. The voluntary insolvency allows the company shed those shackles and instead focus on licensing.

Whether that’s the right decision remains to be seen. Some will suggest that the lack of a high street presence will dilute brand awareness. That may well be the case, but presumably Kiely Rowan feels that the brand’s future was safer outside of its own bricks and mortar.

It’s worth noting that its turnover grew last year as did sales across most regions with Europe being the only one in which sales fell.

In any event, Kiely Rowan has clearly decided it can’t be one of those retail “winners” in its current format. But that’s not to say it should be added to the long list of UK retail casualties over the past few months. Kiely Rowan has taken the path less trodden, but presumably it believes the brand’s survival depends on that change.