Why is Ryanair banning the media from its agm?

Ryanair says ban will allow shareholders to ‘discuss all matters freely with the board’, but what does it not want the press to hear? 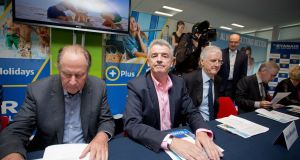 Ryanair, and its chief executive Michael O’Leary, have always recognised that an off-the-wall picture or irreverent quote in the papers is practically priceless in marketing terms.

But the airline has never been slow to tell the media where to go either. Hence, Ryanair, its boss, and various news organisations have clashed plenty of times down through the years.

Even allowing for a sometimes stormy relationship with the media, shutting it out of its annual general meeting is still a radical step to take.

Listed companies do not have to let reporters and photographers into their agms, but virtually all do. Even though the banks limited cameras at meetings following the financial crisis, they still allowed the particularly stormy shareholders’ meetings to be covered.

Most agms are uneventful, but a few can be significant. In Ryanair’s case it was at the company’s 2013 annual shareholder meeting that O’Leary announced that it was time to be nice to customers, and its “always getting better” programme was born.

What’s now happening is that one of the biggest publicly-quoted companies on the Irish stock market is holding an important annual event behind closed doors. It is entitled to do that, but most others, even those under extreme pressure, opt to let the media in.

There is no real reason for Ryanair to ban the media. Strikes, mainly here, but also in Europe, have kept it in the news this summer. More recently it has faced criticism from shareholder advisory firms such as Glass Lewis over the composition of its board, but this is almost as annual an event as the meeting itself.

Ryanair said the move to ban media from its agm was to allow shareholders to “discuss all matters freely with the board without these discussions being distorted for PR purposes”.

What is it planning to discuss that it doesn’t want the media to hear?