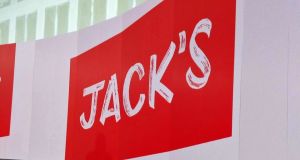 Jack’s is named after Jack Cohen, who in 1919 founded the business that became Tesco. Photograph: Alys Key/PA Wire

Tesco is going head-to-head with fast-growing German discounters Aldi and Lidl on price with a new grocery store it says will be the cheapest in town. Chief executive Dave Lewis unveiled Tesco’s new Jack’s format on Wednesday, saying it would sell 2,600 essential items including 1,800 Jack’s-branded products.

That compares with the thousands of goods on sale in its traditional supermarkets, and mimics the German chains’ focus on simplicity and own-brands to keep costs down – a strategy that has seen them grab 13 percent of Britain’s grocery market.

Some 10-15 Jack’s stores will open over the next six months. Jack’s is named after Jack Cohen, who in 1919 founded the business that became Tesco. But the limited number of openings and initial capital expenditure of about £25 million disappointed some analysts, as media reports had said that up to 60 existing

“Aldi and Lidl are unlikely to be too concerned about this opening salvo,” Patrick O’Brian, research director at GlobalData, said. – Reuters