Cantillon: Alcohol Bill to be finally squeezed through after being assailed from both sides 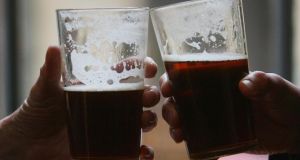 They haven’t gone away, you know. Alcohol industry lobbyists, and their pro-health counterparts, who have assailed politicians over the Public Health (Alcohol) Bill for almost three years, are still making last-ditch bids to influence its provisions. The Government is limbering up to squeeze the Bill through its final stage in the Dáil in coming weeks.

A striking feature of the debate around the new rules, since they were first proposed in December 2015, has been the ferocity with which the wider drinks industry has attacked the Bill.

Lobbyists for the industry have slowed down the Bill with a long list of objections over issues such as cancer warning labels, pricing and advertising restrictions. The industry’s lobbying reached a crescendo at the end of 2017 and earlier this year, as TDs considered proposed amendments to the Bill.

Meanwhile, the drink industry’s commitment to swaying the Bill was almost matched by anti-drink lobbyists and pro-health advocates, who displayed a ferocity all of their own as they urged the Government to hold fast.

The latest returns this month to the lobbying register, covering the period from May to the end of August, show the number of individual lobbying actions related to the Bill have fallen to a fraction of those conducted in earlier periods.

Elements within the industry were still trying, however, to get changes adopted before the Government flashes the lights and puts the Bill to a final vote.

The Bill is expected to pass early in the new Dáil term, perhaps even sometime next month. How will the pro-drink/anti-drink lobbyists fill their days then?