Deliveroo withdraws from Germany to concentrate on other markets

Established players have been consolidating to fight back against newer startups 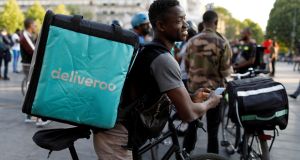 Deliveroo will stop operating in Germany, amid stiff competition for food-delivery services in Europe’s largest economy.

Deliveroo will stop operating in Germany, amid stiff competition for food-delivery services in Europe’s largest economy.

In emails to customers Monday, the company said that it would no longer be delivering in the country from August 16th.

“At Deliveroo we’re on a mission to create the very best food delivery service in the world, and at the heart of this is offering a service that works brilliantly for our customers, riders and restaurants,” Deliveroo said in its message to its customers. “Where we cannot do this to the level that we expect and you deserve, we won’t operate. Therefore, Deliveroo’s focus will now be on growing our operations in other markets around the world.”

The European food-delivery industry has long suffered from expensive competition and established players have been consolidating to fight back against newer startups. Takeaway. com agreed to buy the German businesses of Delivery Hero last year, and Britain’s Just Eat and Takeaway.com of the Netherlands are now pursuing an all-share £5 billion (€5.4 billion) combination, to become Just Eat Takeaway.com.

Deliveroo hasn’t ruled out returning to the German market in the future, according to a person familiar with the matter. It will refocus its resources to grow its business in other parts of Europe and the Asia-Pacific region. Job losses for employees, riders and restaurants will be compensated, the person said.

In May, Deliveroo said it had secured $575 million (€512.6 million) in funding from Amazon. com and other investors. - Bloomberg

1 Columbia Sportswear defies gloom with first Irish standalone shop
2 ‘The rental situation stops me moving back home’
3 Why are markets booming when a crash is on the way?
4 Restaurants file court actions against insurers over lockdown losses
5 Could your old car be giving away all your secrets to its new owner?
6 Brexit: System agreed for Irish goods to skip checks on UK trade
7 Second Covid-19 outbreak and no-deal Brexit an appalling vista
8 VAT cuts are for businesses – consumers will still pay the same
9 How to further divide the economy using the wage subsidy
10 Income tax receipts prove remarkably resilient to coronavirus
Real news has value SUBSCRIBE