London Briefing: Flint’s firing might come as a relief for HSBC lifer 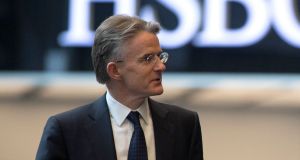 The humiliation of being sacked as chief executive of HSBC after less than 18 months in the role must be acute for John Flint, who has spent his entire 32-year career at the bank. But, on a personal level, perhaps his shock exit is better than the alternative, which was to stay.

According to insiders at the London-listed, Asia-focused bank, the understated Flint had become increasingly isolated in recent months.

“He didn’t seem to be enjoying it,” one executive was quoted as saying. “He was tired, worn out and fed up.”

It doesn’t help, of course, when you know the rest of the board is out to get you. HSBC chairman Mark Tucker paid tribute to Flint on Monday as his abrupt departure was revealed alongside a strong set of first half results. But he was rather less than forthcoming about exactly why Flint had to go.

In “bigging up” Flint’s interim replacement, Noel Quinn, Tucker provided ample clues, however. The head of HSBC’s global commercial bank and now acting chief executive “brings pace, he brings decisiveness, he brings ambition”, Tucker said, the implication being that these qualities had been found lacking in Flint.

But Flint’s reputation is not the only one tarnished by this affair – Tucker should also be feeling acutely embarrassed that his chosen chief executive has not made the grade.

Tucker arrived at the bank less than two years ago, the first chair to be recruited from the outside rather than being chosen from the ranks, as has always been the HSBC way.

Shortly after his arrival he confirmed Flint’s appointment, speaking at the time of the new chief executive’s “passion” for the business. Now, Tucker simply says, “We made the best decision at the time”.

Both internal and external candidates will be considered for the chief executive post, with analysts betting on a big hitter from outside the bank. As for Quinn, the temporary replacement, he now has “a wonderful opportunity to show what he can do”. No pressure there then.

Tucker also needs to show what he can do – his next choice of chief executive has to be the right one, not just for the sake of his own reputation, but for the bank’s 238,000-strong global workforce.

It’s been a busy but grim week for the retail sector, with Monday’s news that another 4,500 jobs are to go at Tesco followed on Tuesday by the likely loss of 1,000 jobs at the Karen Millen and Coast fashion chains.

The two brands will live on as part of Boohoo’s growing stable of fashion names, which include Nasty Gal and PrettyLittleThing. But while Boohoo, an online-only retailer, has bought the digital operations of Karen Millen and its sister brand Coast, it’s left the bricks and mortar side.

Thus two more well-known names will disappear from the high street, with the closure of 32 standalone shops and 177 concessions, many trading in struggling House of Fraser and Debenhams department stores. The outlets are to be kept open by the administrators only for as long as it takes to sell the stock.

Karen Millen has been struggling for some time and, given the dire state of the department store sector, not to mention the wider retail market, it’s little surprise that the business has gone under.

The deal looks to be a good one for Boohoo, which is paying £18 million (€19.5 million) for the two brands which serve an older and more well-heeled customer base than its fast-fashion brands.

Another name disappearing from the high street is Spudulike, the jacket potato chain. Founded 45 years ago, it’s weathered more than a few recessions but finally collapsed last week. All 37 shops have now closed their doors, with the loss of 300 jobs.

There’s been better news this week for another retail chain, which has been saved from collapse. But the not quite such good news for the preppy fashion brand Jack Wills is that it’s Sports Direct that has raced to the rescue.

Mike Ashley has more than enough problems of his own, what with mounting losses at House of Fraser and a huge tax bill from the Belgian authorities. But he still found time on Monday to snap up Jack Wills’ 100 stores in the UK and Ireland, along with its 1,700-strong workforce.

Employees will, of course, be relieved their jobs have been saved, but they might have hoped for a white knight that was in slightly better shape itself.

1 Why gift a son now if it eats into his tax-free inheritance threshold?
2 Mortgage arrears: Prevention is definitely better than cure
3 Government to avoid ‘cliff-edge’ on Covid-19 payment changes
4 Chris Johns: Economic self-harm is the root of populism
5 Big Four told to outline plans for audit split in UK by October
6 US stocks climb after huge rally in Chinese shares
7 All parties to High Court hearings told to wear facemasks
8 Amazon.com shares top $3,000 for the first time
9 Brexit: System agreed for Irish goods to skip checks on UK trade
10 Dealz to create 75 jobs with three new Irish stores
Real news has value SUBSCRIBE