An Post parcel volumes to hit weekly record of 3.3m

‘Spectacular’ levels of ecommerce evident in run-up to Black Friday 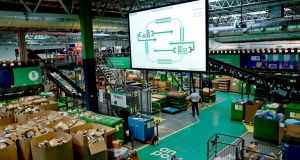 An Post’s Dublin mails centre, adjacent to its Dublin parcels hub, which opened a year ago in Dublin 12. Photograph: Maxwell’s.

An Post is forecasting the busiest ever online shopping fortnight with Black Friday and a desire to support Irish retailers spurring ecommerce activity ahead of the expected reopening of non-essential shops next week.

The postal company, which last month opened its second automated parcel hub in Dublin, said it had delivered 2.5 million parcels a week in recent weeks, and that it was forecasting that this would hit 3.3 million a week between now and mid-December.

The mix of store closures, online offers and early Christmas shopping is driving a 230 per cent increase in parcels, with the expected volume of 3.3 million weekly items comparing to 1 million a week in the same period last year.

The record parcel volumes mean processing and delivery were “taking longer than normal”, it cautioned.

“Parcel volumes have reached spectacular levels as the lockdown has driven all early-Christmas purchasing online. Our €30 million investment in parcels automation ensures we have the capacity to deal with this surge,” said chief executive David McRedmond.

“We have 1,000 extra staff helping us this Christmas, and our delivery staff have new scanning technology and electric vehicles to help them get parcels and letters to customers as quickly as possible. We’re working around the clock to deliver parcels and cards to customers speedily and safely.”

Its network of post offices is also handling record numbers of parcels over the counter, with customers advised to allow plenty of time for posting, especially when sending parcels overseas.

An Post also reported a steady rise in letter volumes, which it said was in response to its Send Love and Memories campaign.