Vodafone’s Irish income fell 6.6% in first half of its financial year 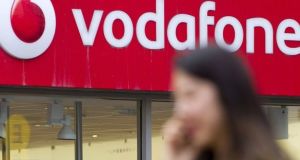 Vodafone’s Irish revenues declined to €396 million in the six months to the end of September, down from €424 million a year earlier

Vodafone’s Irish revenues declined by 6.6 per cent in the the first half of its financial year, according to the telco’s latest global results.

Revenues here (before mergers and acquisitions) declined to €396 million in the six months to the end of September, down from €424 million a year earlier.

In the first quarter, revenues fell to €195 million from €209 million a year earlier, while in the second quarter its income reduced to €201 million from €215 million.

At group level, Vodafone, the world’s second-largest mobile operator, said it was increasingly confident about its full-year performance after a “resilient” first half, despite underlying momentum being obscured by the impact of Covid-19.

Vodafone nudged up the target range for adjusted core earnings to between €14.4 billion and €14.6 billion for its 2021 financial year, compared to €14.5 billion for the previous year.

For the six months to the end of September, its adjusted earnings fell by 1.9 per cent to €7 billion on a 2.3 per cent drop in group revenue to €21.4 billion, as the pandemic impacted roaming revenue and handset sales.

The slight upgrade to the outlook compared to a previous forecast for full-year core earnings to be “flat to slightly down” on the previous year, and analysts were forecasting on average €14.37 billion.