‘Brexit is a huge unknown. There’s nothing that kills a company more’ 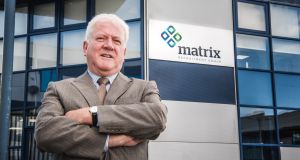 Kieran McKeown of Matrix Recruitment: ‘Worst-case scenario would be that no one can agree, maybe a hard border is forced up North by both the UK and the EU’

Fermanagh man Kieran McKeown has seen his fair share of a hard Border growing up in his home county. He now lives in Waterford as chief executive of Matrix Recruitment, which has five offices throughout the Republic. He has concerns over his clients’ companies and looks towards new sectors in the run-up to Brexit.

What was your reaction when you heard that the UK had voted to leave the EU?
To be honest I was very surprised because I just took it as a given that they were going to stay in the EU. But I suppose in hindsight when you’d look at it, the amount of misinformation that was around at the time and the lack of preparedness that the government of the day had, it wasn’t such a shock.

How is your business likely to be affected?
Basically we are a service company, so we don’t have a product as such, and in terms of the amount of business we would do in the North it’s virtually zero, but we would be very much aware of our clients’ businesses and the impact it can have on them, particularly companies in the agri-food sector or selling consumables into the UK.

When did you begin preparing for Brexit, and what contingency plans have you put in place so far?
It has only been as the deadlines became closer in the last number of months that we started looking at it in greater depth. We’ve got to have a certain volume of jobs coming into this business that we recruit for because we have a certain number of consultants and each one of these consultants has to have a number of jobs to be able to succeed in what they are doing and to be able to get the service levels and fill rates that are required from us.

Are you examining new markets or suppliers, and if so, how practical is it?
We started looking at other businesses that maybe we hadn’t planned to get into at this stage this year. For example, construction and builders’ providers – that’s an area where you could definitely see growth. Technology companies and targeting those. The other area that we would be fairly active in would be financial services. We would love to see some of those companies not all being located to Dublin but to maybe come down here to the southeast or the midlands.

Does Brexit present any opportunities for your business?
Well, I think obviously moving into different business sectors is one thing and the other thing would be that maybe there’s a different skill set of candidates that we would need to provide. We might need to have people with greater linguistics skills, an understanding of how sales happen in different countries and of the cultures in those countries would be very important as well.

When do you expect to be ready for Brexit?
It’s an ongoing process. I think what you are looking at is: when are things likely to happen? And based on that, then how is that going to affect our clients? If we can read that and understand that, we’ll be able to help them in their recruitment requirements going forward.

What’s your best and worst-case scenario?
Best-case scenario I think is having certainty of what will happen and when it will happen so the companies that are going to be affected can prepare and implement proper plans. It’s just such a huge unknown. There’s nothing that kills a company more than when they can’t plan for something.

Worst-case scenario would be that no one can agree, maybe a hard border is forced up North by both the UK and the EU. At the end of the day, there is only a finite amount of time you can wait for the process to end. The new way of doing things has got to come in at some stage and people are just going to get fed up.

How might the Irish or the British governments, or the EU, help ease the pain of Brexit for your company’s sector?
The reality for our clients is that they need direction, they need certainly and they need that as soon as possible.

Looking out five years, how do you see your business or industry will have changed as a result of Brexit?
At that stage, you would certainly hope there is a lot more certainty on the market. Companies will know their customers, they will know who’s supplying them with their raw materials. They will know their markets; they will have established themselves in those markets, which could lead to a very good consolidation of their business here at home.

1 Suspicions rife as key Brexit trade talks begin in Brussels
2 Corona beer firm reeling after 8% slide due to coronavirus
3 Life as a Facebook moderator: ‘People are awful. This is what my job has taught me’
4 How well paid do you think you are? Here’s how to work it out
5 Bank leaked my loan request to family who tried to rip me off
6 Irish companies restrict travel over coronavirus fears
7 Coronavirus: Iseq down 11% in five days as global sell-off is worst week since 2008 crisis
8 ‘The only time apartments were viable was in . . . Ballsbridge, Killiney and Dalkey’
9 Pharma giant AbbVie warned Government against ‘unfair’ €572m tax bill
10 Digicel plots network-sharing deal amid ‘tight’ cash levels
Real news has value SUBSCRIBE