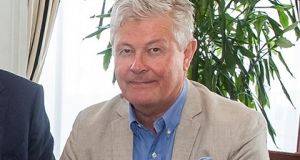 Waterford-based businessman Eddie Walsh, who made €7.5 million from the sale of an engineering company 12 years ago, is set to make a multiple of that amount in his latest deal with a German buyer worth an estimated €50 million.

The Berlin-based group has traditionally mainly been engaged in providing catering, security, cleaning and other facilities management services in central Europe.

STS, which is mainly owned by Mr Walsh and his family, started business in 2012 and is currently generating €150 million in sales a year.

While Mr Walsh declined to give The Irish Times the financial details of the deal, industry sources have said that transactions in the sector in recent years would put value of about €50 million on the sale. As the majority owner, Mr Walsh and his family are set to get the majority of this sum.

Mr Walsh had previously been managing director of another Waterford-based company called Suir Engineering, which was sold to Dutch technical services company Imtech in 2007 for €30 million. The businessman received €7.5 million from that deal.

STS’s staff of over 700 people will not be affected by the sale, which remains subject to clearance from German competition authorities.

The Irish company’s senior management team, headed by chairman Mr Walsh and managing director Richard Hogan, will remain with STS in their existing roles for at least three years following the deal.

Berlin-based Dussmann’s annual turnover is in the region of €2.3 billion. It employs 66,122 people in 17 countries.