Discomfort for Corbyn as #expelmetoo movement gains traction on Twitter 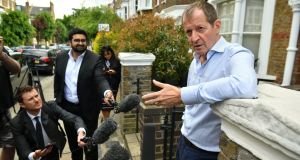 Alastair Campbell speaks to the media outside his home in north London on Tuesday after he was expelled from the Labour Party for voting for the Liberal Democrats in the European elections. Photograph: Dominic Lipinski/PA Wire

Mr Watson’s criticism came as scores of Labour members took to social media under the #expelmetoo hashtag, daring the opposition party to carry out a mass purge of those who voted for parties that want the UK to remain in the EU.

Jeremy Corbyn’s equivocal position on Brexit prompted a huge protest vote by Labour members last week, with many backing the Lib Dems and Greens, who back a second EU referendum. The Lib Dems polled 20 per cent, Labour 14 and Greens 12.

Mr Campbell, former head of communications for then prime minister Tony Blair, was expelled from the party after he admitted on the BBC that he had voted Lib Dem, adding it was the first time in his life he had not voted Labour.

Mr Watson, who wants Mr Corbyn to come out strongly for a second EU referendum, said the party should be “listening rather than punishing”. He called for an “amnesty” for those who voted for other parties in despair at Labour’s Brexit policy.

To add to Mr Corbyn’s discomfort, people claiming to be Labour members made public on Twitter their decision to vote for the Lib Dems and Greens, challenging the party to throw them out too.

The #expelmetoo movement, an attempt to overwhelm the Labour disciplinary machinery, put a 21st century social media twist on the “I am Spartacus” moment in the Hollywood blockbuster about the first century BC gladiator.

Louise Ellman, a senior Labour MP, said the party had been quick to expel Mr Campbell but had allowed “festering” anti-Semitism – the party’s treatment of that issue is now being investigated by the Equality and Human Rights Commission.

Charles Falconer, a former Labour lord chancellor, accused Mr Corbyn’s leadership team of being behind the “politically explosive” decision to throw out Mr Campbell, a controversial figure because of his role in advising Mr Blair during the Iraq war.

However, a Labour spokesman said: “Publicly declaring or encouraging support for another candidate or party is against the rules and is incompatible with party membership.”

Critics of Mr Corbyn claimed the party was adopting double standards, pointing to a tweet by the Labour leader in 2012 in which he congratulated George Galloway on his “astonishing result” in beating Labour in a Bradford byelection.

Mr Corbyn has so far refused to commit Labour explicitly to backing a second EU referendum, saying instead that the option was on the table but the party’s preference was for a general election.

The Labour leader’s allies said Mr Corbyn remained committed to “a public vote”, although Mr Watson and others want him to argue for a second referendum and to pledge the party to supporting a Remain vote.

Michael Heseltine, former Conservative deputy prime minister, lost his party’s whip in the House of Lords after he announced he would be voting for the Lib Dems in protest at his party’s stance on Brexit. – Copyright The Financial Times Limited 2019

1 No time limits and no pre-booking: what the unpublished pub reopening guidelines reveal
2 Teenage boy dies at Powerscourt Waterfall in Co Wicklow
3 Gardaí surrender 13 people to Polish police
4 Covid-19 may spread more easily in schools than thought, US report warns
5 Anger in Beirut over missed warnings about ammonium nitrate at port
Real news has value SUBSCRIBE