Boris Johnson to be summonsed over claims made before Brexit referendum 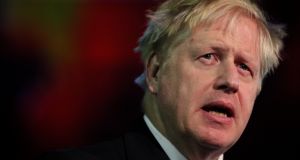 British politician Boris Johnson will be summonsed to court to face accusations of misconduct in public office for comments made in the run-up to the EU referendum. Photograph: Brian Lawless/PA Wire.

Boris Johnson will be summonsed to court to face accusations of misconduct in public office over claims he was lying during the EU referendum campaign when he said the UK gave the EU £350 million a week.

The favourite to replace Theresa May as Conservative leader faces a private prosecution by campaigner Marcus Ball. Lawyers representing Mr Ball lodged an application to summons Mr Johnson to court, claiming he had deliberately misled the public before the 2016 referendum and then repeated the statement during the 2017 general election campaign.

In a written decision, District Judge Margot Coleman said Mr Johnson would be summonsed to court.

“The allegations which have been made are unproven accusations and I do not make any findings of fact,” she said.

“Having considered all the relevant factors I am satisfied that this is a proper case to issue the summons as requested for the three offences as drafted. The charges are indictable only.

“This means the proposed defendant will be required to attend this court for a preliminary hearing, and the case will then be sent to the Crown Court for trial.

“The charges can only be dealt with in the Crown Court.”

In her ruling, Ms Coleman said: “The applicant’s case is there is ample evidence that the proposed defendant knew that the statements were false.

“One example is given that in a televised interview in May 2016 the proposed defendant stated, ‘we send the EU £10 billion per year’ and that therefore he knew that the £350 million per week figure (£20 billion per year) was incorrect.”

A section of the judge’s ruling included Mr Johnson’s position, which described the application as a “(political) stunt”.

His position in summary said: “This application is brought for political purposes. The position presented to the Court is that this is a disinterested attempt to improve the standards of political debate.”

It added: “The application is a (political) stunt. Its true purpose is not that it should succeed, but that it should be made at all. And made with as much public fanfare as the prosecution can engender.”

The £350 million figure was emblazoned on the red campaign bus used by Vote Leave during the referendum, with the slogan saying “We send the EU £350 million a week let’s fund our NHS instead”.

“The conduct of the proposed defendant Boris Johnson was both irresponsible and dishonest. It was, we say, criminal.”

Mr Power said the prosecution’s application was not brought to undermine the result of the Brexit referendum and was not about what could have been done with the saved money.

“The allegation with which this prosecution is concerned, put simply, is Mr Johnson repeatedly misrepresented the amount that the UK sends to Europe each week,” he said. “The UK has never sent, given or provided £350 million a week to Europe — that statement is simply not ambiguous.”

Mr Ball has raised more than £200,000 through a “Brexit Justice” crowdfunding campaign to pay for the private prosecution.

Originally from Norfolk, he has worked full-time on the prosecution case since June 2016.

Mr Ball previously said he and his backers “aspire to set a precedent in the UK common law making it illegal for an elected representative to lie to the public about financial matters”.

The offence of misconduct in public office carries a maximum sentence of life imprisonment, according to the Crown Prosecution Service website. - PA

1 Covid-19: One more death and 174 further cases confirmed in State
2 German nudist chases wild boar that stole laptop at Berlin lake
3 ‘It is soul destroying’: Kildare hotelier on calling guests to cancel
4 Midlands lockdown Q&A: Firstly, is it a lockdown or not?
5 Garda checkpoints in Kildare, Laois and Offaly as restrictions come into force
Real news has value SUBSCRIBE