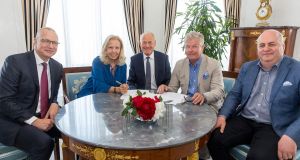 At the signing of the deal to acquire STS were (from left): Stephan Possekel, managing director DTS; Catherine von Fürstenberg-Dussmann, chairman of the board of trustees of the Dussmann Group; Dr Wolfgang Häfele, executive board spokesman, Eddie Walsh, chairman STS Group and Richard Hogan, managing director STS Group

Waterford-based businessman Eddie Walsh has sold his specialist engineering company STS Group to German facilities management giant Dussmann Group in a deal estimated to be worth about €50 million.

Mr Walsh, who is a native of Co Tipperary, was previously managing director and shareholder in Suir Engineering, which was sold to Dutch technical services provider Imtech in 2007 for €30 million. STS Group was incorporated in 2006 and began doing business in 2012.

STS, whose main clients are in the pharmaceutical, data centre, commercial, transport and utilities sectors, generated €150 million of sales last year, the company and Dussmann said in a joint statement on Monday.

STS employs over 700 staff and is understood to carry out 60 per cent of its business in continental Europe. Many of its Irish contracts are with overseas companies investing in the State.

The takeover deal is expected to close by the end of June, subject to approval from German competition authorities.

The Irish company’s senior management team, headed by chairman Mr Walsh and managing director Richard Hogan, will remain with STS in their existing roles for at least three years following the deal. STS’s employees will be unaffected by the takeover, the two companies said.

“The combination of STS and Dussman group provides an excellent opportunity for the employees of the company,” said Mr Walsh. “Our clients will continue to enjoy the same level of superior service, delivering complex technical projects within time and on budget but post acquisition will also benefit from the increased scale and investment as part of a €2.3 billion turnover group.”

A similar deal in the sector in recent times was the management buyout in late 2017 of Mercury Engineering, based in Sandyford, Dublin 18. The transaction valued that business at €150 million, or more than three times annual revenues. The STS sale would be worth up to €50 million on the same basis.

Mr Walsh declined to comment on the financial details of the deal.

Dussman’s executive board spokesman Wolfgang Haefele said STS will be the cornerstone of the creation of a new group division, Dussmann Technical Solutions, and complement its current technical services offering, including refrigeration, air conditioning and elevator systems.

The STS deal follows on from the German group’s acquisition of Gaetano Paolin, an Italian technical services provider, in 2018. Further complementary acquisitions are also planned, according to the statement.