Bercow says MPs will have a say on no-deal Brexit 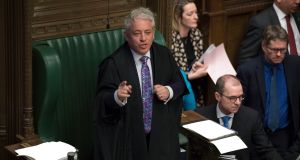 Speaker of the House Jon Bercow. Brexiteers have complained that some of his decisions have stretched the rules to allow opponents of Brexit to set the agenda. Photograph: Jessica Taylor/PA Wire

MPs will have a say over whether Britain leaves the European Union without a deal on October 31st, Commons speaker John Bercow has promised. Speaking at the Brookings Institution in Washington, Mr Bercow dismissed a claim by Brexiteers that parliament could not stop a no-deal Brexit because it was the legal default position unless MPs approved a withdrawal agreement.

“There is a difference between a legal default position and what the interplay of different political forces in parliament will facilitate. The idea that parliament is going to be evacuated for the centre stage of debate on Brexit is simply unimaginable. The idea the House [of Commons] won’t have its say is for the birds,” he said.

“The idea that there is an inevitability of a no-deal Brexit would be a quite wrong suggestion. There is no inevitability whatsoever about that.”

The speaker enjoys great latitude in interpreting Commons rules of procedure and in choosing which precedents to invoke and which to ignore. Brexiteers have complained that some of Mr Bercow’s decisions in recent months have stretched the rules to allow opponents of Brexit to set the agenda.

His intervention on Tuesday came as foreign secretary Jeremy Hunt warned that attempting to push a no-deal Brexit through parliament would be “political suicide” for the Conservatives. One of 11 candidates to declare for the Conservative leadership so far, Mr Hunt promised to seek a better Brexit deal from Brussels with a new negotiating team that would include members of the DUP and the hardline Brexiteer European Research Group (ERG).

“If you have proper representation in your negotiating team from other voices ... I think you can then give Brussels confidence that they are talking to someone who can deliver a deal,” he told the BBC.

“I’m worried that if we don’t solve it, we will face a political crisis that is far bigger actually than our legal relationship with the EU, it could lead to the destruction of our party system and the end of my own party.”

The BBC said on Wednesday it would host a debate with all the candidates in mid-June and a special edition of Question Time featuring the two candidates MPs chose to go before the entire Conservative membership. Andrew Neil will also conduct head-to-head interviews with the final two candidates.

Labour has expelled Tony Blair’s former spin doctor Alastair Campbell after he said he had voted for the Liberal Democrats in last week’s European Parliament elections. Mr Campbell said he was “sad and disappointed” that his vote, which was motivated by his support for a second Brexit referendum, had led to his expulsion.

Jeremy Corbyn is under growing pressure to put Labour’s support behind the campaign for a second referendum after the party’s heavy losses to the pro-Remain Liberal Democrats, Greens and Scottish National Party.

In a blow to the party leadership, the Equality and Human Rights Commission has launched a formal investigation into the Labour Party over allegations of anti-Semitism. The investigation into whether Labour has “unlawfully discriminated against, harassed or victimised people because they are Jewish” is the body’s first such inquiry into a political party since it investigated the British National Party a decade ago.