Branson advises entrepreneurs to quickly ‘put themselves out of business’ 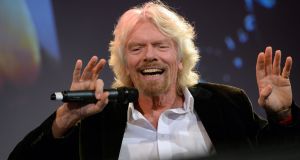 Richard Branson addressing the Pendulum Summit at the Convention Centre in Dublin. “Too many entrepreneurs cling on to every single little detail for too long. It makes them ill, it ruins relationships . . .” Photograph: Dara Mac Dónaill

Any budding entrepreneur should be doing their utmost to put themselves out of a job as early as possible, according to Sir Richard Branson.

Speaking at the Pendulum Summit in Dublin on Wednesday, the businessman, whose Virgin Group controls more than 400 companies, said the key to success was being able to see beyond small day-to-day issues.

He also said the most important asset an entrepreneur has is their brand, which they must both “zealously promote and protect”.

Addressing an audience of about 3,000 people, Mr Branson urged attendees to look to pass on the running of a company quickly and to look at promoting from within if you want sustained success.

“The best advice i can give to anyone who is an entrepreneur who has started their first company is to very quickly put themselves out of business,” he said.

“Too many entrepreneurs cling on to every single little detail for too long. It makes them ill, it ruins relationships, they don’t keep fit and healthy, and they get bogged down with the minutiae so they are no longer pushing the company forward,” he added.

Sir Richard advised that businesspeople should look to bring in a replacement early to allow them to look beyond the everyday.

“Find someone better than you, or as good as you, or at least good enough so that they can take on your job and do the day-to-day stuff while you can focus on the bigger picture,” he said.

Finding a good chief executive is also critical to success said Sir Richard, adding that promoting from within is usually more effective than bringing in someone external.

“It can be very demoralising if you say to a group of people that not one of you is good enough to run a company. You should be ensuring that the deputy in any firm is good enough to step into the shoes of their boss at any stage. Also, if you promote from within you know people’s strengths and weaknesses ahead of time,” he said.

Sir Richard, who discussed everything from teaching Archbishop Desmond Tutu to swim, to coming close to death while on one of his many daredevil world record attempts, said it was important to care for every single member of a company.

“Just like a flower needs water, people flourish when they are praised. Even the finest criticism can be so damaging especially if it comes from the person running the company,” he said.

“People know when they haven’t done something right, they don’t need to be told,” he added.

The Pendulum Summit, an annual two-day event, which has previously attracted guest speakers such as Deepak Chopra and Tony Robbins, continues on Thursday.

5 Covid-19 has changed the office for good