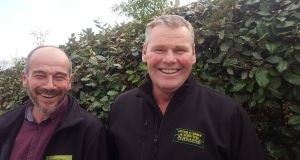 Peter O’Brien started his landscaping business in 1963 from the garage at the side of the house in Artane in Dublin. Originally from a farming background outside Kells, Co Meath, he loved being outdoors. His first customers were part of the 1960s housing boom in Raheny and Donnycarney, near Artane.

Initially he worked on his own, rotavating gardens while second jobbing. But he quickly realised he couldn’t do it alone and hired his brother and then his cousin. By 1970, he had a team of 15 working for him.

“As soon as I could walk, I was put to work,” says Ciarán O’Brien, the current chief executive of the company. As for taking over the business, O’Brien can’t remember an official handing over by his father. “The whole family was involved in the business from the start. It was more out of necessity than design.”

O’Brien’s brother, Dermot, manages sports and drainage and his sister Karen works in accounts. Two other sisters, Helen and Mary, were employed with the company for a long time, but have reduced their input in recent years.

“Dad still keeps his keen eye on the business,” O’Brien says. “He learned the landscape trade as he went along – as many people did in those days. My mother Kitty was always by his side, and still is. Initially she handled all the administration but, as things took off, my dad took on his first secretary, Liz.”

Like most people in the company, she stayed with O’Brien’s a long time, until her retirement. O’Brien recalls the early years fondly.

“It was a different time, when the local bank manager in Artane would call around to the house to have financial meetings. My mother would bake tarts and they’d have tea. She’d also cook lunch for the lads every day. They were simple days.”

Relationships are at the foundation of this company’s story and form the basis for how the company still works. O’Brien met Peter O’Toole in horticultural college. He offered to help out for six weeks: that was 26 years ago. He’s now a director of the company and O’Brien’s right-hand man.

“Nobody on the books has been with us for less than 10 years and the same goes for our staff.”

At the height of the boom, O’Brien’s Landscaping employed almost 150 people working in landscape, sports, drainage and maintenance. The company now employs half that number, but is rapidly expanding to meet growing demand from the construction boom.

“We’re working smarter rather than harder these days – making strategic investments in systems, infrastructure and, most importantly, people.”

The lean company model came about as a response to the brutal impact of the recession. “We were left swinging to the tune of €2 million and had no choice but to write it off.”

“The use of large, mature planting was huge during the boom when everyone wanted everything instantly,” he recalls. From 2009 to 2012, fewer and smaller plants have been used, with people less inclined to showing off. “But things are turning again since 2014, as money has started to flow and the industry has started to boom.”

A refocusing of the company on core activities, a plants-in-the-ground approach, also helped the company to survive.

“If we went down, a lot of other companies would have come with us. Things may have changed in this world, but we firmly believe that our word is our bond and trust is everything.”

O’Brien is optimistic about the future and sees parallels between now and the 1960s. “Successful companies are about the right people doing the right jobs for the right clients. That’s our focus and our clients feel the benefits. We’re always adapting, seeking out new ways of doing things and keeping our staff at the front lines of innovation.”

“One of the joys of this business is driving across the country seeing thriving schemes we completed years earlier. There really isn’t a part of the country [where] we’ve not had a presence.”

Recently the most significant project completion for O’Brien’s is Adare Manor. “It gives me and the team such a sense of pride to know that no project is too big or complex for us to complete to world class standards.”

Brexit hasn’t affected business at the moment but O’Brien feels it may attract some UK companies to Ireland and sees that as an opportunity to landscape and gain new customers.

O’Brien is currently expanding with a new office in Streamstown Lane in Malahide, and in Kinsealy for administration. His advice to his younger competitors is to err on caution. “Weigh up projects, do your due diligence on companies and their credit and reputation, and make sure you are making enough profit.”

Increased urbanisation, green infrastructure and awareness of the benefits all things green offer huge potential for companies to capitalise on them. “Of course, these opportunities must be viewed considering increased global instability, our own fragile economic recovery and tighter budgets.”

1 Direct sea routes to Europe offer certainty in choppy Brexit waters
2 Admission of mistake in Oxford vaccine dose raises doubts over reliability
3 There was no vaccine for Anglo: Why the last crisis was different
4 ‘I don’t need to do any of this. . .I don’t actually need to work.’
5 Promontoria barred from pursuing doctor over Ulster Bank loan
6 China’s economic growth slowest since 1993 over trade war
7 1,500 retailers gear up to reopen next week
8 Solicitor must be struck off over ‘extremely serious’ misconduct, court rules
9 Transact Campus to create 110 jobs in Limerick city
10 Keywords Studios buys US-based Gnet Media in $32m deal
Real news has value SUBSCRIBE