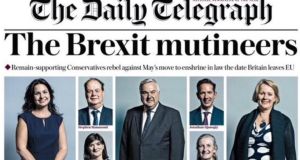 Anna Soubry was one of 15 Conservatives pictured on a newspaper’s front page under the headline “The Brexit Mutineers”.

A Conservative MP identified as a “mutineer” over Brexit in the Daily Telegraph on Wednesday has reported a number of threats to the police since the article was published. Anna Soubry was one of 15 Conservatives pictured on the newspaper’s front page under the headline “The Brexit Mutineers”.

The newspaper said the MPs were threatening to vote with the opposition against the government’s move to specify in legislation the date of Britain’s withdrawal from the EU. Speaking in the House of Commons on Wednesday, Ms Soubry called on the speaker, John Bercow, to urge those reporting on parliament to act responsibly.

“According to my office, they have just reported about five, if not more, tweets to the police issuing threats against myself following the front-page article on today’s Daily Telegraph. Would you therefore, Mr Speaker, make it very clear to everybody, in whatever capacity, that they have an absolute duty to report responsibly and make sure they use language that brings our country together and makes sure that we have a democracy that welcomes free speech and an attitude of tolerance,” she said.

Mr Bercow said he was “extremely concerned” by what Ms Soubry said, adding that nobody should be subject to threats because they expressed a political opinion. He said that, however flawed it might be, a free press was indispensable in a free society but MPs were also free and duty-bound to do what they think is right.

“I hope she won’t take it amiss if I say not only is any attempt to threaten or intimidate her, or any colleague, repugnant. It is also doomed to fail. I know her and I know my colleagues well enough to know that even if there are people who think they can intimidate, even if, hypothetically, there were someone in the media who thought he or she could intimidate, that person would be grossly mistaken. Members will not be intimidated and they never should be,” he said.

Ms Soubry returned to the tone of the debate over Brexit later when MPs continued their line-by-line scrutiny of the European Union (Withdrawal) Bill. She said that history would not judge parliament kindly when it considered some of the rhetoric that had become commonplace since last year’s referendum.

Kate Hoey, one of a small number of Labour MPs who campaigned for Brexit, said that Brexiteers had also been subject to abuse since the referendum but they thought it was better to ignore it.

“I would love to ignore death threats,” Ms Soubry said.

“The thing is, actually, I find them quite frightening.”

Earlier, during prime minister’s questions, Theresa May said it was right and proper that there should be a lively debate about the legislation. She said the government was listening to proposals for improving the Bill and hoped MPs could come together behind it.

The government had not lost any votes on amendments to the Bill by Wednesday evening but 15 Conservative rebels could be enough to overcome the government’s majority with the DUP and compensate for pro-Brexit MPs backing the government. The government’s proposal to include the date of withdrawal in the Bill has attracted the loudest protests but that amendment will not be voted on until next month.

Priti Patel on Wednesday used her first speech since losing her job as international development secretary last week to call on MPs to ignore those who have misgivings about the Bill.

“There are members tabling amendments, and rightly so. But I don’t think we should listen to, really, those that simply do not have the confidence in this House, in our democracy and also in our country going forward, along with the suggestions that we are incapable of governing ourselves. Fundamentally, we should be rejecting that,” she said.