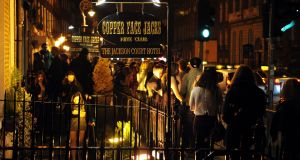 The club has long since entered Dublin night time folklore and has amassed the massive cash pile over the years as a result of its enduring popularity. Photograph: Aidan Crawley

Boosted by Dublin’s All Ireland senior football win in September of last year and a booming night time scene in the capital, the cash mountain at the Coppers firm last year jumped by €5.1 million from €54.79 million to €59.84 million.

The company enjoyed the increase in pre-tax profits after the company’s gross profit — including unspecified “other operating income” — increased by 8.5 per cent going from €11.35 million to €12.32 million in the 12 months to the end of January 31st this year.

The club - owned by former Garda, Cathal Jackson and housed in the Jackson Court Hotel on Dublin’s Harcourt Street — has long since entered Dublin night time folklore and has amassed the massive cash pile over the years as a result of its enduring popularity.

The night-club opened in 1995 and a number of new entrants have entered the lucrative Dublin night time scene in recent years but armed with its €59.9 million cash pile, the directors of Breanagh state that “the company is proactive in trying to stay ahead of competition”.

In the year under review, the night-club’s profile was given a boost with Late Late Show host, Ryan Tubridy decamping there in a well publicised post-show visit with Olympic heroes, Gary and Paul O’Donovan and Annalise Murphy.

Paula Jackson sits on the board with Cathal Jackson and they rewarded themselves well last year with pay to directors going from €684,498 to €790,568 — this equates to pre-tax weekly pay of €15,203 for the two.

The night-club operates seven nights a week and contains six bars, two covered beer gardens, a cocktail bar and a premium level that is made of a private room aimed at hosting private parties.

The nightclub area also boasts a cocktail bar and a VIP bar.

The net cash generated from operating activities at the company last year totalled €5.56 million compared to €4.48 million in 2015.

The firm paid corporation tax of €786,03. As a result the firm enjoyed post tax profits of €4.3 million.

At the end of January last, the firm’s tangible assets had a book value of €13.2 million.

On the risks facing the company, the directors state that the company has considered risks prevalent and are in a position to change the emphasis of their sales in response to changes in economic conditions.