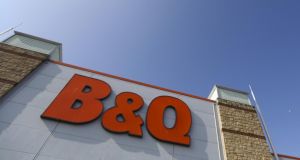 The underlying pretax profit of B&Q owner Kingfisher fell 13 per cent in its most recent annual results. Photograph: Chris Ratcliffe/Bloomberg

Home improvement retailer Kingfisher is parting company with chief executive Véronique Laury after it reported a 13 per cent fall in annual profit, more than halfway through a five-year transformation plan that was designed to boost earnings.

The group, whose main businesses are B&Q and Screwfix in Britain and Castorama and Brico Depot in France and elsewhere, has just entered the fourth year of a five-year programme that aimed to raise annual profit by £500 million from 2021. However, profits actually went backwards in its 2018-2019 year.

Kingfisher said on Wednesday that separating out the £500 million targeted profit improvement from the rest of the business no longer reflected how it is managed – effectively an abandonment of the target.

It is now targeting growth in group sales, gross margin, retail profit and return on capital employed “over the medium term”. It forecast a flat gross margin in the 2019-2020 year.

Its shares closed down 2.4 per cent, extending year-on-year losses to 29 per cent.

Kingfisher said the search for a new chief executive had started and was supported by Ms Laury (53), who has been the boss since December 2014. One of only a small number of women in charge of top British companies, she will continue in her role until a departure date had been confirmed.

Kingfisher also said Steve Willett, chief transformation, digital and IT officer, was retiring after 20 years at the company.

The home improvement market has been tough in Britain where Australia’s Wesfarmers came unstuck after a failed investment in the Homebase chain.

Kingfisher said the UK market remains uncertain and it was mindful of softer housing market activity in France.

It plans to exit Screwfix in Germany with the closure of 15 stores and is considering the closing another 15 poorly performing stores across the business over the next two years.

Underlying pretax profit fell 13 per cent to £693 million in the year to January 31st, 2019, reflecting weakness in Castorama France and losses in Russia and Romania.