Betting giant adds over 450,000 customers in US in third quarter with 1.8m active users 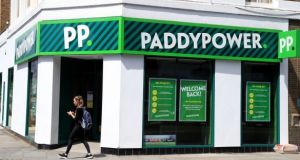 Flutter merged with Canada’s Stars Group, owner of Pokerstars and Skybet, in May, creating the world’s biggest betting business.

Paddy Power and Betfair owner Flutter reported a 30 per cent rise in revenues to £1.3 billion (€1.45 billion) in the third quarter and upgraded its full-year earnings guidance.

In a trading update, Flutter said average daily customers grew 41 per cent in the three months to the end of September with double-digit growth across all key regions as sports recommenced following Covid disruptions.

“Flutter’s performance in the third quarter exceeded our expectations in both sports and gaming. Our strong trading continued as we grew market share in key regions while retaining our commitment to safer gambling practices,” said chief executive Peter Jackson.

Flutter merged with Canada’s Stars Group, owner of Pokerstars and Skybet, in May, creating the world’s biggest betting business.

In Ireland and Britain, Paddy Power turnover rose 32 per cent while SBG’s was up 26 per cent. In Australia, the company recorded a 76 per cent rise in revenues.

Online revenues at Paddy Power Betfair grew 14 per cent in the quarter with increases of 5 per cent in sports and 31 per cent in gaming.

The group added more than 450,000 customers in the US, with 1.8 million active users at the end of September.

Flutter warned that increased investment in winning new customers in the US means it will likely record a higher-than-expected earnings loss of between £160 million to £180 million for the division compared to a previously guided £140 million to £160 million loss.

The group said outside of the US, full-year earnings with interest, taxes, depreciation, and amortisation (ebitda) will likely be between £1.27 billion and £1.35 billion driven by higher customer volumes across all divisions. It previously guided ebitda of between £1.17 billion and £1.32 billion.

“We are now a truly global business with significant scale. As such we are in a unique position to respond to the many opportunities we see across our growing markets,” said Mr Jackson.

“Looking ahead, whilst the outlook with respect to Covid-19 remains uncertain, we are confident that our business is well positioned to capture further growth in a sustainable and responsible way.”