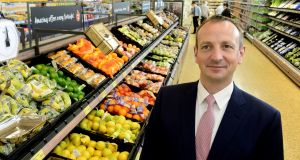 Aldi is to appoint a new chief executive for the UK and Ireland as the German supermarket embarks on a management shake-up.

Matthew Barnes, an Aldi veteran who joined the company in 1997, will make way for Giles Hurley, who will become the new UK and Ireland chief executive.

Mr Hurley is also an Aldi stalwart, having spent almost 20 years at the firm over which time he has held down roles such as training director, group buying director and, most recently, UK group managing director since 2015.

He will take the hot seat on May 1st. Meanwhile Mr Barnes, who is credited with overseeing the supermarket’s meteoric rise from upstart to challenger to the so-called Big Four, has been promoted to the “co-ordination board” of Aldi South, which is the parent firm of the grocery giant’s UK operations.

He will also join the board of Hofer KG, which acts as management holding for Aldi’s Austrian and international shareholdings.

In the new role, Mr Barnes will continue to oversee the UK and Ireland as well as the US market.

Aldi and German rival Lidl have been waging war on the Irish and British grocery markets in recent years. Although SuperValu, Dunnes Stores and Tesco remain the top supermarkets in Ireland in terms of market share, recent figures show the German chains have a market share of just under 12 per cent each.

To illustrate this, Aldi raked in more than £10 billion in sales in the UK and Ireland last year for the first time after notching up record sales over Christmas.

Aldi currently has 130 stores in the UK and Ireland.

The supermarket said total UK sales were more than 15 per cent higher during December compared with the same month in 2016. – PA