Can stock markets keep rising in 2020?

The best forecasts are characterised by humility rather than certainty 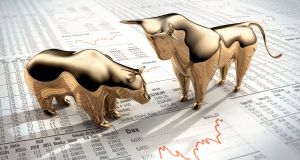 Soaring stock markets meant 2019 was a great year for equity investors. Do market strategists think stocks will build on their gain in 2020 or should investors be cautious in this late-cycle bull market?

Investors certainly had it easy in 2019. Not only did the S&P 500 gain some 25 per cent, the maximum peak-to-trough pullback during the year was just 6.8 per cent – one of the smallest annual pullbacks seen in recent memory, notes LPL Research strategist Ryan Detrick.

The vast majority of national stock markets posted handsome gains in 2019, helping the MSCI World Index advance more than 20 per cent. The Iseq was one of the big winners, soaring some 30 per cent.

And investors shouldn’t assume that what goes up must come down, says Detrick. In nine of the past instances where the S&P 500 posted annual returns of at least 20 per cent, stocks gained the following year, averaging gains of 14 per cent. CNBC conducted a similar analysis, crunching the data as to what happens following banner years where stocks gained at least 25 per cent. Since 1950, the S&P 500 averaged further gains of 11.25 per cent.

That said, the major Wall Street strategists are advising investors to brace for more modest returns in 2020, with forecasts ranging from gains of 10 per cent to losses of 3 per cent.

Now, price forecasts need to be taken with a pinch of salt. Strategists tend to want to be seen as bullish but not too bullish so they typically forecast high single-digit gains, even though extreme returns are actually quite normal; the S&P 500 ending the year within the range suggested by strategists has only happened about one in every five years, notes US money manager Meb Faber.

Still, this year’s forecasts are more cautious than normal. The median forecast is for gains of 7 per cent while the average forecast represents a modest 5 per cent gain.

Goldman Sachs and Credit Suisse are among the most optimistic forecasters, both arguing that improved economic conditions can drive increased earnings. Both also argue that price/earnings multiples can continue to expand, the former citing continued strength in corporate share buybacks and the latter pointing to low interest rates and relatively poor returns in other asset classes.

However, another long-term bull, Ed Yardeni of Yardeni Research, says valuations are already above historic norms. Stocks soared even though earnings were flat in 2019 so a further rise in valuation multiples would represent “too much of a good thing”, says Yardeni, potentially risking a “nasty correction”. Elevated valuations do limit upside, agrees Goldman; while risky assets benefited from central bank easing in 2019, markets “will need to learn to fly on their own”, with growth now needed to drive returns.

The same point is stressed in the 2020 outlook of Bank of America (BofA), with returns likely to be driven solely by earnings growth as opposed to valuation multiples continuing to rise.

BofA says lofty valuations are just one reason why the US, after years of outperformance, may lag emerging markets and Europe next year. Crowded positioning in the US relative to the rest of the world, coupled with non-US markets offering the possibility of more earnings upside, suggests a “rotation into global equities”.

Some strategists also caution that political risks may shift towards the US in 2020, now that Brexit uncertainty has diminished and populist pressures in several European countries have subsided.

In contrast, November’s presidential election will see political temperatures rise in the US. A raft of strategists have issued notes on the potential market impact of Elizabeth Warren, the left-leaning Democrat senator whose talk of a wealth tax and tougher regulation of the technology, banking and healthcare sectors has spooked many on Wall Street. Warren’s odds have receded lately, but her candidacy is not the only one that may prove problematic for investors.

Were the Democrats to gain control of the Senate and Congress as well as the presidency, 2017’s tax cuts would likely be rolled back, says Goldman Sachs, potentially resulting in a stock market fall of up to 20 per cent.

Others suggest US political pressures are overstated, pointing to how we saw similarly dire warnings prior to Donald Trump’s election victory in 2016, but increased political uncertainty may well drive increased market volatility in 2020.

Politics aside, a “heady mix of uncertainty is likely to persist”, says Barclays, with the US-China trade war posing the “single biggest risk to the global economy”. Markets have rallied on hopes that trade tensions are easing but Barclays is “circumspect about market expectations of a rapid resolution”.

Implementation and monitoring of any deal “will take years” while America may also turn its attention to other regions. “If so, the global economy will have to cope with higher tariffs for longer than was originally envisaged and a more widespread economic impact than first anticipated”, cautions Barclays in its 2020 outlook.

BofA is more optimistic, saying growth should pick up after the spring as trade concerns ease, but admits things could “re-escalate” after November’s presidential election. The trade war might well morph “from a trade war to a tech war”, says BofA, a possibility which has prompted the bank to advise investors to no longer overweight the technology sector.

Still, while it’s human nature to dwell on the risks, there are also a range of “key supporting factors”, says Barclays. The US consumer “remains in great shape”; unemployment is “historically low”, the corporate picture “still looks relatively bright”; central banks are in easing mode and politicians around the world are “increasingly considering fiscal support, proving policymakers are willing to act to support growth and extend the cycle”.

Of course, no one has a crystal ball, and Barclays admits the biggest risk in 2020 may well come from a completely unexpected event. An “event-driven selloff”, such as the collapse of the Long-Term Capital Management hedge fund in 1998, the plunge in energy prices and the eruption of fears around China in 2015, the trade tensions and Federal Reserve rate hikes in late 2018 – anything of this nature could trigger a rapid market selloff.

No one can reliably see the future, which is why the best forecasts are characterised by humility rather than certainty. Risk means more things can happen than will happen, as economist and market historian Elroy Dimson of London Business School once noted. Most people manage investment risk by ignoring the headlines and sitting tight, periodically rebalancing their portfolio so that their asset allocation doesn’t get out of whack. Irrespective of what happens in 2020, that remains a sound approach.

1 Bank leaked my loan request to family who tried to rip me off
2 Bank of Ireland to sell distressed mortgages and cut costs as profits fall
3 Mastercard to create 1,200 new jobs by expanding base in Dublin
4 Ryanair and Aer Lingus monitor impact of coronavirus on travel to Italy
5 Digicel’s earnings rise as it looks towards refinancing $1.3bn of bonds
6 Wall St falls sharply as coronavirus fears surge
7 Profits fall at production company behind Brendan O’Connor’s Cutting Edge show
8 Will disabled brothers be homeless when Fair Deal loan falls due?
9 EU and British positions harden ahead of Brexit talks
10 Boris Johnson's new immigration regime will damage much more than industry
Real news has value SUBSCRIBE
Save money on international transfers