‘If you do a big acquisition, the odds are loaded up against you’ 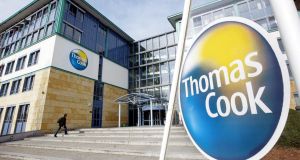 Mergers and acquisitions is a very risky business and the Thomas Cook debacle was not an isolated one. Photograph: Michael Probst/AP Photo

The recent collapse of Thomas Cook, undone by a huge debt pile dating back to a disastrous 2007 merger with MyTravel, is a reminder of an indisputable fact: mergers and acquisitions (M&A) are a very risky business.

The Thomas Cook debacle was not an isolated one.

A year after its $11 billion (€ 9.9 billion) acquisition of software firm Autonomy, HP wrote down $8.8 billion (€7.9 billion) in relation to the purchase.

Then there are the truly epic disasters – Bank of America buying Countrywide for $2.5 billion (€ 2.2 billion) in 2008 only to end up losing tens of billions due to its purchase of the troubled lender, Vodafone’s $180 billion (€ 162 billion) takeover of Mannesman at the height of the dotcom bubble in 2000, the infamous $164 billion (€ 148 billion) AOL-Time Warner around the same period.

Of course, there are success stories too – Google buying Android for a song ($50 million) in 2005, Disney pairing with Pixar in 2006, the merger of oil giants Exxon and Mobil in 1998 and Warren Buffett’s Berkshire Hathaway is a hugely successful conglomerate famous for its many acquisitions.

That said, Buffett and his Berkshire partner, Charlie Munger, have often expressed scepticism about the wisdom of most mergers and acquisitions. “Two-thirds of acquisitions don’t work”, Munger has said. “Ours work because we don’t try to do acquisitions – we wait for no-brainers.”

The data confirm that, more often than not, M&A is a losing game. Multiple studies have found a large majority of mergers and acquisitions are unsuccessful – as high as 83 per cent, according to one KPMG study.

Roughly half of all mergers are reversed within a decade, according to renowned valuation expert and New York University finance professor Aswath Damodaran. “If you look at the collective evidence across acquisitions,” Damodaran said at a CFA Institute conference last year, “this is the most value-destructive action a company can take.” Yet, 2018 was the third-biggest year for mergers and acquisitions (M&A) activity in history, with deal volume topping $4.1 trillion.

Why do they fail? The main reason is that the acquiring company overpays.

To persuade shareholders in the target company to sell, the acquiring company has to pay a premium to the recent stock price – since 1990, acquisition premiums have averaged 32.7 per cent, according to Boston Consulting Group.

The most common justification, according to the aforementioned KPMG study, is the apparent synergies on offer; when the right two companies come together, they can be worth more than the sum of their individual parts, so that two plus two can equal five. In reality, there is no evidence of synergy in more than half of mergers, according to the KPMG study.

Reverse synergies – effectively, when two plus two ends up equalling 3.5 – occurred in about one-third of cases. Synergy is “seldom delivered in acquisitions because it is incorrectly valued, inadequately planned for and much more difficult to create in practice than it is to compute on paper”, says Damodaran.

There can also be a clash of cultures at combined companies. Organisational inertia and resistance is underestimated, cautioned M&A expert Dr Christopher Kummer in a 2007 paper examining why mergers tend to fail.

“Integration takes time and it is painstaking,” noted Kummer. “Unexpected compromises must be made with unions, employees and other stakeholders, diluting the original plan and its targets.”

Managers tend to be too optimistic. Indeed, realistic plans would likely not be enough to convince company directors to pursue an M&A transaction, said Kummer. Thus, deals have to be ambitious, but “far too often the thin line between overambitious and unrealistic is crossed”. Consequently, “M&A efforts are often doomed to fail from the very beginning due to unrealistic expectations”.

The high failure rate in M&A has been known for 40 years, says Damodaran, so why do companies continue to make low-probability M&A bets? The main reason is the quest for growth. Demand for double-digit growth from analysts and investors can be hard to satisfy, the Kummer study noted, so M&A transactions can seem “the only solution, even if they might have failed in the past”.

Acquiring a new company may seem easier than coming up with a new best-selling product, especially if recent attempts at organic growth disappointed.

As management guru Peter Drucker once noted, “dealmaking beats working”. Dealmaking is “exciting”, “fun”, “romantic, sexy” whereas working requires “grubby detail work”. That, Drucker added, is “why you have deals that make no sense”. Executive hubris is also an obvious factor. A minority of deals do work out and overconfident CEOs are likely to think they can beat the odds. One study found indicators of CEO hubris – strong recent performance, recent media praise, a measure of the CEO’s self-importance – were “highly associated with the size of premiums paid”; the study found that the greater the CEO hubris, the greater the shareholder losses.

A study of Korean companies found similar results, with bidder CEOs “overconfident about deal synergies” and displaying “strong and irrational self-beliefs”. As Warren Buffett once quipped, many executives see themselves as beautiful princesses who can turn toads into handsome princes; alas, Buffett has “observed many kisses but very few miracles”.

Nor do companies always learn from past mistakes. The KPMG study found fewer than half carried out a formal review process after completing a deal. Remarkably, 82 per cent believed the major deal they had been involved in was a success, even though the reality was that almost all did not live up to expectations.

Similarly, in his book Your Money and Your Brain, financial columnist Jason Zweig cites a survey showing only 37 per cent of managers think mergers create value for the buyers and just 21 per cent think mergers meet strategic goals set by acquirers; however, when it comes to their own deals, 58 per cent say they created value and 51 per cent believe they met their strategic targets. This combination of factors means M&A activity isn’t likely to out of fashion any time soon, but investors should be wary of buying into the hype, according to Aswath Damodaran.