Investors undone by elementary mistakes in doing the maths 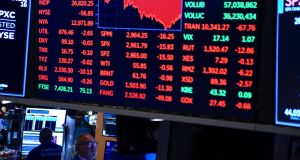 Traders working at the New York Stock Exchange. Investors should be wary of sensationalist media headlines that make market declines seem larger than they really are. Photograph: Johannes Eisele/AFP/Getty Images

Can the market multiply and divide? The question might seem odd – after all, financial markets are dominated by sophisticated investors who aim to keep stock prices in line with reality. Nevertheless, ‘Can the Market Multiply and Divide?’ is the title of a recent award-winning paper co-authored by Yale finance professor and behavioural finance expert Kelly Shue and the answer to that question may surprise some observers – no, it can’t.

Shue asks us to consider two otherwise identical stocks, one trading at $20, the other at $30. Both have the same market capitalisation – let’s say, $1 billion. Imagine both companies get good news, namely the arrival of a new and highly-skilled chief executive. If investors and markets were rational, both companies would enjoy the same percentage gain. But is it possible, Shue asks, that investors will think in terms of dollars rather than percentages? That is, might they believe the same piece of good news should correspond to a $1 increase in price for both stocks?

Now, anyone who pauses for a minute should see this would be pretty dumb. Microsoft, the most valuable company in the world with a market capitalisation in excess of $1 trillion, is worth more than Amazon; the fact Amazon shares trade for about $1,800 while Microsoft shares cost about $135 means nothing.

Warren Buffett’s Berkshire Hathaway has never split its stock so one share costs over $300,000, but the company’s market capitalisation (about $500 billion) is barely half that of Apple, which trades for about $200. Boeing and Pfizer have similar market capitalisations, with both companies valued at about $200 billion, but Boeing’s share price (about $365) is roughly 10 times that of Pfizer ($35).

Nevertheless, her research shows investors don’t think purely in terms of percentages; they think in terms of numbers and dollar amounts.

To return to the earlier example, this tendency towards “non-proportional thinking” means many investors think the $20 and $30 stocks should both enjoy a $1 increase in their share prices. Consequently, the lower-priced stock enjoys a bigger percentage gain (5 per cent) than the higher-priced stock (3.3 per cent), resulting in stock prices departing from their fundamental value.

The “cleanest evidence” comes immediately after a stock split. Companies sometimes split their stock to lower price levels; for example, a 2:1 stock split would see a company that traded for $100 on one day trade for $50 the next.

Splits are purely superficial affairs – nothing fundamental has changed. However, if investors think in terms of dollar units, then market reactions will be too big after the split. Again, that’s exactly what the data shows – the day after a split, volatility is 20 to 30 per cent higher than it used to be, and it stays higher for six to 12 months after the split.

This has important implications for active investors and markets. As already noted, low-priced stocks will be more volatile and over-react to news; higher-priced stocks will be more prone to under-reactions. Secondly, it has long been known that small-cap stocks tend to be more volatile than their larger counterparts, leading academics to believe that size is a fundamental determinant of market risk. That’s not the case, says Shue. Rather, small-cap stocks tend to have lower share prices and it is this factor – the lower share price, not the market capitalisation – that is driving the higher volatility.

Even very large-cap stocks with low share prices are much more volatile than they should be, she finds.

Thirdly, it is well-known that past winners tend to go on and underperform, while past losers go on to outperform. Again, this may be because investors overreact to news concerning lower-priced stocks, says Shue. Over time, market mispricings get corrected; a low-priced stock that has seen an excessive percentage move will, over time, move in the opposite direction after the initial market reaction.

Fourthly, the title of Shue’s paper echoes an old paper by behavioural finance expert and Nobel economist Richard Thaler. That paper, Can the Market Add and Subtract?, pointed to numerous cases of blatant market mispricing, such as when 3Com decided to sell shares in its Palm Computing subsidiary in 2000. Palm’s initial public offering took place when dotcom fever was at its highest; investor excitement was such that at the end of the first day’s trading, Palm was worth almost twice as much as 3Com, even though 3Com still owned almost all of Palm.

Efficient market theorists might say Thaler, who has long argued that markets are prone to irrationality, focused on a handful of extreme cases, or that markets are more efficient today (his aforementioned paper was published in 2003). Shue’s findings suggest otherwise; investors still make elementary mistakes and these errors continue to distort market prices.

Can we remedy this bias towards “non-proportional” thinking? Shue suggests media outlets and stock-tracking apps show percentage returns rather than price changes by default. Financial statements, too, should show information in percentage terms. This may not happen, so investors should be extremely careful to translate price changes to percentage changes.

In particular, investors should be wary of sensationalist media headlines that make market declines seem larger than they really are. In August, for example, some headlines stressed how the Dow Jones Industrial Average had just experienced its sixth-largest points drop in history. In percentage terms, however, it was only the 435th-largest drop. Investors should remember point drops are meaningless and misleading.

Finally, active investors looking to buy stocks following market declines might like to tilt their investments towards lower-priced stocks, says Shue; they are more likely to have been excessively punished and are therefore positioned to outperform in any market rebound. Once you’re aware of this bias, you might well decide to try and take advantage of it.