Beware of IPOs and it can pay to be greedy: Investor lessons from 2019 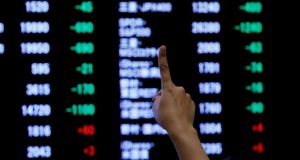 Sometimes it pays not to stick your finger in the air and be greedy when others are fearful. File photograph: Reuters

A year ago, investors were fleeing stocks as indices endured their most dramatic declines since the end of the global financial crisis. But 2019 has turned out to be a banner year for stock markets, one which holds important lessons for investors.

1. It pays to be greedy when others are fearful

A year ago, stocks were in the middle of their worst December since 1931. At the market bottom on Christmas Eve, the S&P 500 had fallen 20 per cent from its September highs. Most investors thought things would get worse, not better: sentiment, as measured by the weekly American Association of Individual Investors (AAII) polls, had plunged to its lowest level in over five years.

Who could have predicted this extraordinary turnaround?

Anyone who studied market history. In January, billionaire investor Ken Fisher noted that stocks typically post above-average returns following down years. Two successive negative years have happened, said Fisher, but only during global recession or world war. In fact, getting an average post-correction rebound implied “outstanding” returns were likely in 2019, said Fisher; the S&P 500 had averaged 34 per cent gains in the 12 months after corrections bottomed out. This year has almost perfectly followed the historical pattern, bearing out Warren Buffett’s famous advice that it pays to be greedy when others are fearful.

Last December’s US interest rate hike was the fourth in 2018 and investors were deeply worried that Federal Reserve chairman Jerome Powell was too hawkish in his outlook. The market volatility spooked Powell, however; within weeks, he had performed a policy U-turn, turning unexpectedly dovish and ultimately cutting rates three times in 2019.

This situation was mirrored the world over; during the third quarter, 58 per cent of central banks cut rates, the highest percentage since the aftermath of the global financial crisis. Although sceptics have warned for years that central banks are running out of ammunition, it’s clear monetary policy continues to matter a lot to stock market investors.

Monetary policy has been especially important over the last decade, with investors feeling there is little alternative to equities in a world of rock-bottom interest rates, but it’s hardly a new development. Since 1982, the S&P 500 has averaged annualised gains of 20 per cent between the first rate cut and the next hike, according to Strategas Research. “Don’t fight the Fed” is an old investing adage, one that investors continued to heed in 2019.

This year was proof that there’s more than a little truth in the old joke that IPO stands for “it’s probably overpriced”. Investors certainly thought so in the case of WeWork, baulking at talk of a $47 billion valuation. Weak investor demand for the loss-making company resulted in WeWork’s initial public offering being pulled.

WeWork was not alone in this regard; according to Dealogic, 38 IPOs were pulled in 2019, compared with just eight in 2017. Unlike WeWork, ride-sharing app Uber at least managed to make its market debut in May, but the share price has gone south ever since; last month, it hit all-time lows, falling more than 40 per cent from its IPO price.

Shares in Uber’s rival, Lyft, have also disappointed, losing one-third of their value since March’s IPO. Meanwhile, international investors have been lukewarm towards Saudi Aramco, dashing expectations it might become the world’s first $2 trillion company.

While there have been some strong performances among newly-listed companies, 2019 has become an increasingly difficult year for IPOs. According to Dealogic, three in every four IPOs in the fourth quarter priced below the midpoint of the range announced by underwriters.

Dealogic’s IPO Health Indicator, based on seven equally-weighted factors, has fallen significantly since September, suffering its second-largest drop on record. The fact that all this has occurred in a buoyant stock market suggests investors are increasingly suspicious of loss-making companies seeking to raise public funds.

It may have been a great year for stocks, but it wasn’t a great year for US corporate earnings, which have been flat. Bears see market gains in the face of lacklustre earnings as unsustainable, but the reality is that investors tend to look forward, not backward.

Right now, investors are willing to look past flat earnings in 2019, betting that growth will return in 2020. Whether such hopes will materialise is open to question – estimated earnings growth rates for 2020 have fallen from 12.9 per cent to 9.9 per cent in recent months and are still falling, with Goldman Sachs predicting they will come down further to about 6 per cent.

In any event, it pays to remember that markets are driven by expectations and that bad earnings don’t necessarily equal bad market performance. In his book Practical Speculation, former hedge fund manager Victor Niederhoffer notes that his analysis of 65 years of market data showed earnings had risen in 43 years and fallen in 22. Markets averaged gains of 4.9 per cent during the rising years, noted Niederhoffer, compared with 14.2 per cent in years of declining earnings.

In other words, the disconnect between market performance and corporate earnings in 2019 is perfectly normal.

Few Wall Street strategists predicted the S&P 500 would gain 25 per cent in 2019. Most did what they always do – they estimated gains of about 10 per cent.

That might seem reasonable, given that stocks have historically averaged annual gains of around 10 per cent. However, averages can mislead. Historically, the S&P 500 has either risen or fallen by more than 20 per cent in more than 40 per cent of all years.

In contrast, only around one year in six has historically seen returns in the 0-10 per cent range – the kind of prediction strategists make every year. In 2015, financial columnist Morgan Housel noted that over the previous 15 years, the average annual forecast made by major Wall Street strategists was off by a whopping 14.7 percentage points. This year was no outlier in this regard.

The reality is that while wild swings are perfectly normal in stock markets, no one ever takes the risk of issuing wild forecasts.