No bonuses at Goodbody, Stripe well set for an IPO, and Netflix’s Oscar tactics 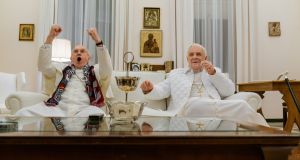 Pope Francis (played by Jonathan Pryce) and Pope Benedict (played by Anthony Hopkins) in the Netflix production The Two Popes. It was one of a number of films made by Netflix that had only a short release in cinemas before being made available exclusively on the streaming service. Photograph: PETER MOUNTAIN/Netflix

Goodbody Stockbrokers scrapped cash bonuses for staff last year to save millions of euro and underpin the group’s earnings and value, at a time when it was being sold to the Bank of China for €155 million. Joe Brennan has the details.

The operating arm of Irish-owned hotel chain iNua has been bought out by its management team, with ownership switching from Noel Creedon to iNua directors Sean O’Driscoll and Paul Fitzgerald. Ciarán Hancock has the details.

Drug companies have called on political leaders to prioritise faster access to life-saving medicines under any new government as controversy arose over another cancer patient denied access to medicine, writes Dominic Coyle.

With the Academy Awards only around the corner, Laura Slattery looks at the increasing tensions between Netflix and cinema owners over the tactics used by the streaming giant to secure Oscar nominations for its movie output.

In personal finance this week, Dominic Coyle lays out the reasons why reform of our pensions system is long overdue and should top the agenda for every political party, and not just at election time.