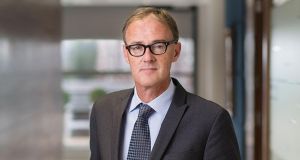 Goodbody managing director Roy Barrett, who has recently been named chairman of the FAI

Goodbody Stockbrokers scrapped cash bonuses for staff last year to save millions of euro and underpin the group’s earnings and value, at a time when it was being sold to the Bank of China for €155 million, according to sources.

This was the first time since 2016 that the stockbroker did not pay a cash bonus, although it did give staff tax-free gift vouchers that year. Last year, however, not even vouchers were paid to staff.

Sources say that bonuses announced just before Christmas at larger rival Davy were, on the whole, lower than in 2018.

Bonuses typically account for a large portion of remuneration at stockbroking firms and can reach well into six figures for high performers.

“Discretionary remuneration is decided annually, based on a diverse range of factors. We do not disclose or discuss these factors in the public domain,” a spokesman for Goodbody said.

While Irish stockbrokers enjoyed a once-off jump in earnings in 2018 as the industry benefited from the €167 million sale of the Irish Stock Exchange to pan-European bourse operator Euronext, underlying earnings were depressed by a lack of corporate activity and initial public offerings. Goodbody owned 26.7 per cent of the Dublin exchange.

Rising costs, particularly relating to market regulations introduced in 2018 – known as the Markets in Financial Instruments Directive II or MiFID II – and in relation to preparations for Brexit, also depressed earnings from equity transactions last year, even as trading volumes rose as global stock markets advanced.

Bank of China agreed last November to buy Goodbody, in which Kerry-based financial services group Fexco has a 51 per cent stake, in a deal worth €155 million.

Management and staff at Goodbody own 49 per cent of the business and will get half of their consideration when the transaction is completed, expected to be in the second quarter of this year, with the remainder due within three years.

While the Competition and Consumer Protection Commission cleared the takeover in December, approval from the Central Bank of Ireland remains outstanding.

Meanwhile, sources have clarified that an overpaid bonus to Goodbody’s managing director Roy Barrett related to 2015 and not the wider no-bonus year of 2016, as had previously been reported.

Disclosures in the company’s 2018 accounts, filed last month, showed that Mr Barrett had an €80,000 interest-free loan as of that year. Goodbody said at the time that it related to an overpayment of a bonus, which had been converted to a company loan to be repaid over time.

The overpayment emerged in 2016 but related to money handed over the previous year, according to sources. Goodbody accounts for 2017 showed that the amount was converted into a loan as of November 2016. The amount outstanding currently is below €20,000.

Mr Barrett was named last month as the chairman of the embattled Football Association of Ireland.