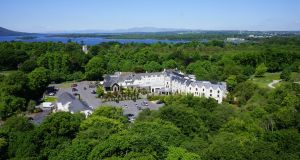 An aerial view of the Muckross Park Hotel in Killarney, which is part of the iNua hotel chain.

The operating arm of Irish-owned hotel chain iNua has been bought out by its management team.

Ownership of iNua Partnership, which operates the eight hotels in the chain, has switched from Noel Creedon to iNua directors Sean O’Driscoll and Paul Fitzgerald. The value of the management buyout (MBO) was not disclosed.

Mr Creedon remains as a director of iNua Hospitality, which is owned by a number of high net worth private investors. They provided €50 million in equity during a private placement in 2018, with €58 million raised in debt via Earlsfort Capital Partners for a five-year term.

“This MBO has been carefully designed to ensure continuity in the mandate from our investors under existing management in iNua,” Mr Fitzgerald said. “Sean and I look forward to working with the dynamic team that has been assembled and growing iNua’s footprint in hospitality into this new decade.”

Mr Creedon said: “I have thoroughly enjoyed developing iNua over the past eight years as it has continued to expand. We have built a highly-effective team that is committed to always delivering for our customers. I now look forward to supporting the executive team as part of the board of iNua Hospitality plc.”

In a statement released to The Irish Times, iNua Hospitality said it expects to report an Ebitda (earnings before interest, tax, depreciation and amortisation) of €8.9 million for 2019. This would represent an increase of 5 per cent on a like-for-like basis.

Revenues are expected to hit €56 million, up 4 per cent on 2018. Its average room rate rose by €2 to €101, while its like-for-like occupancy increased by one percentage point to 75 per cent.

Mr Fitzgerald said the company remained “confident in the fundamentals” of the business. “We continue to drive sustainable growth and are on track to deliver our 2023 strategic targets. The outlook for 2020 is positive and iNua expects to deliver 6-8 per cent growth in normalised Ebitda,” he said.

Founded in 2012, iNua comprises eight hotels with 900 bedrooms and more than 1,200 employees. Its aim is to become the biggest regional hotel group in Ireland.

Based in Cork, the collection comprises the Muckross Park Hotel in Killarney, the Kilkenny Hibernian Hotel, the Tullamore Court Hotel, the Hillgrove Hotel in Monaghan and Radisson Blu Hotels in Cork, Limerick, Athlone and Sligo.

In addition, iNua Hospitality was recently awarded the contract to manage the new 113-bedroom Fairways Hotel in Dundalk.