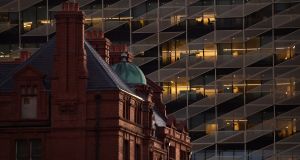 While the Irish Central Bank provided “a possible path based on latest trends” to European officials, it did not issue forecasts. Photograph: Clodagh Kilcoyne

Irish home and commercial property prices are forecast to dip slightly over the next three years, according to figures being used by European authorities to stress test banks across the EU in 2020.

The European Bank Authority, overseeing the assessment, said on Friday that its central projections were based on data received from national central banks. However, sources said that while the Irish Central Bank provided “a possible path which is based on latest trends” to European officials, it did not issue forecasts.

Irish residential property prices are projected to flatline this year following an estimated 2.5 per cent increase in 2019, before declining by 1 per cent in 2021 and a further 2 per cent in 2022, according to baseline economic scenarios being used for the stress tests.

Prices may fall by a cumulative 13.5 per cent over the period in the event of an economic shock, or an adverse scenario that the EBA will use to see if banks have enough capital reserves to cope with an unexpected spike in bad-loan losses.

The baseline scenario for Irish commercial property market is for prices to decline by 0.9 per cent in each of the next three years – leaving it as the only EU state where values are expected to weaken.

Fears over the outlook of the Irish commercial property market were stoked in recent days as some property funds – including funds managed by Irish Life, Zurich Life Assurance and Aviva Life & Pensions Ireland – cut the value of their portfolios after be g hit by a surge in demand from investors seeking their money back.

The lowered valuations reflect what the managers of the funds estimated they would realise if they were to sell the assets in the portfolios. One of the companies, Aviva Life & Pensions, moved on Friday afternoon to block investors from taking their money out of two funds it manages, including a Friends First portfolio, for up to six months.

The fifth set of EU-wide banking stress tests since the EBA was established in 2011 is focusing in particular on how banks would be able to cope with a recession coupled with low or negative central bank rates – which squeeze lending margins – for a prolonged period of time.

The adverse case sees EU real gross domestic product (GDP) declining by 4.3 per cent over three years to the end of 2022. The results of the stress testing of 51 banks, including AIB and Bank of Ireland, will be published at the end of July.