Airbus to pay €3.6bn in penalties for international bribery scheme 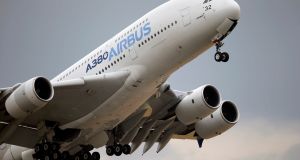 Airbus admitted of a string of bribery and corruption offences stretching back to at least 2008. Photograph: AP

Airbus for years conducted a “massive scheme to offer and pay bribes”, involving very senior executives, according to disclosures in courts in Washington DC, Paris and London, as Europe’s aerospace champion agreed to pay €3.6 billion in penalties to regulators in France, the UK and the US.

Many of the bribes were paid through shell companies set up by executives working for an autonomous strategy and marketing unit once described by former chief executive Tom Enders as “bullshit castle”, according to investigators in the three countries.

This unit, which managed a corps of middlemen in export markets, concealed the bribes by creating fraudulent contracts, accepting fake invoices for services never delivered, and creating false activity reports, Airbus admitted in the US.

French prosecutors said the company had boosted profits by €1 billion as a result of violations uncovered in their investigation.

The details emerged as courts in the three countries approved the deferred prosecution settlement struck with regulators in France, the UK and US. Airbus will pay €2.1 billion to France, €983 million to the UK and about €530 million to the US.

Airbus’s admission of a string of bribery and corruption offences stretching back to at least 2008, as well as breaches of disclosure on US arms export filings, brings to an end a nearly four-year investigation that marks a milestone for global anti-corruption co-operation.

The admission is also a major victory for anti-corruption reforms introduced in France in 2016, following US action against Alstom and BNP Paribas in 2014. These aimed to match international standards in the pursuit of white-collar crime by toughening sanctions and compliance standards.

During the investigations, Airbus handed over some 30 million documents to authorities, while employees around the world were interrogated and computers confiscated.

“The seriousness of the criminality in this case hardly needs to be spelt out,” said Victoria Sharp, a senior judge in England’s high court. “It is no exaggeration to describe the investigation it gave rise to as worldwide, extending into every continent in which Airbus operates.” The investigations demonstrated “that bribery was . . . endemic in two core business areas within Airbus”.

The offences spanned several countries including Taiwan, Indonesia, Malaysia, Nepal, Russia, China and Colombia. They were committed at a time when the European aircraft maker was rapidly gaining on its rival Boeing in the global passenger jet market. People close to the group stressed, however, that the violations involved only a minority of aircraft contracts. – Copyright The Financial Times Limited 2020