Ministers flock from far and wide for broadband photo op

Business Week: also in the news was Digicel; jobs; the economy; and commercial property 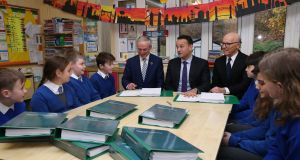 There’s nothing politicians love more than a good photo op, and there was no shortage of them at St Kevin’s National School in Co Wicklow this week at the signing of the contract for the long awaited National Broadband Plan.

Taoiseach Leo Varadkar and no less than seven of his ministers chartered a special bus to Wicklow for the event, which Varadkar billed as “biggest investment in rural Ireland ever”.

The project will see high-speed fibre broadband connections brought to more than half a million remote homes and premises over the next seven years. And 300 towns and villages across Ireland are to get high-speed internet hubs.

The contract with National Broadband Ireland, the company led by US businessman David McCourt, has been dogged by controversy for several years, with officials in the Department of Expenditure questioning it on a value-for-money basis. Ultimately, the answer will depend on take-up in rural Ireland, with many people somewhat unsure how that will pan out.

Former minister for communications Denis Naughten this week said it would be up to Government to make sure there are job opportunities to feed demand.

Certainly, the employment figures on a national scale are more positive than they’ve ever been, surpassing 2.3 million for the first time. The number of people employed here grew by 53,700 (2.4 per cent) to 2.32 million in the third quarter of 2019.

This is about 80,000 higher than the boom-time high of 2.23 million recorded in the fourth quarter of 2007, although the State has a bigger population now and a larger workforce than in those days.

It gets better, as an OECD report said those workers are in line for further pay rises in the event of a soft Brexit. “The unemployment rate will continue to fall to historically very low levels, albeit more slowly, with wage pressures becoming intense,” it said.

Meanwhile, Gabriel Makhlouf used his maiden formal speech as Central Bank governor to defend the regulator’s mortgage-lending rules, and to say the economy must improve its resilience to challenges posed by Brexit, climate change and technology.

Makhlouf said mortgage-lending restrictions introduced in 2015 – and which are currently subject to their annual review – “are a permanent feature” of the mortgage market.

Separately, the Association of Irish Mortgage Advisors said the rules unfairly penalise second-time buyers such as families who bought during the boom and are now struggling to find the 20 per cent deposit needed to move to bigger properties.

On the insurance front, Michael Whelehan, head of claims at IPB Insurance – the State’s largest public sector insurer – said courts must not only throw out fabricated and inflated claims, but impose costs and prison sentences on fraudsters.

Elsewhere, Prof John Sweeney, one of the State’s foremost climate change experts, warned we are well overdue a storm surge that would leave the insurance industry facing €1 billion in claims.

Businessman Denis O’Brien had a fresh headache to contend with this week as his telecoms company Digicel was on the receiving end of a downgrade and some fairly stark commentary from ratings agency Fitch.

The company, set up by O’Brien in 2001 and operating in 32 markets across the Caribbean, Central America and Asia Pacific regions, faces “imminent refinancing risk” and will have to restructure a lot of its almost $7 billion debt pile in the next 18 months.

Fitch pushed its view on the group’s creditworthiness deeper into what is termed junk status, lowering its ratings by one level to CC, which implies a “default of some kind appears probable”.

Staying with corporate news, Irish hospitality group Press Up Entertainment, which is owned by Paddy McKillen jnr and other investors, abandoned a plan to raise up to €50 million through the disposal of a 45 per cent stake in its business to investors.

And Saudi Arabia sharply scaled back the initial public offering of its state oil company after international investors gave its ambitious plans a lukewarm response.

Based on a price range set on Sunday, Saudi Aramco will aim to sell shares at a valuation of $1.6 to $1.7 trillion (€1.5 trillion), which would make it the world’s largest publicly traded company by market capitalisation – a record currently held by Apple.

The kingdom will offer a 1.5 per cent stake to investors via a listing which it aims to complete as early as next month. Mohammed bin Salman, the kingdom’s heir apparent, had initially sought to sell 5 per cent, raising up to $100 billion.

Meanwhile, Airbnb signed a $500 million deal to sponsor the Olympic Games until 2028, while Google Europe International Technology – an Irish subsidiary of the tech giant – posted a profit before tax of $2.03 billion in 2018, up 45 per cent on the year before.

What will eventually become Ireland’s tallest building got the green light for an additional floor this week, although the plan will not increase the overall 88-metre height of the building.

Developer Johnny Ronan secured planning permission to add another floor to Tanat’s planned tower overlooking the Liffey at Tara Street. Dublin City Council gave the green light, which will extend the number of hotel rooms from 107 to 157.

Finally, Michael Smurfit is expected to agree the sale of his K Club golf resort in Co Kildare within the coming weeks as negotiations with hotelier and nursing home operator Michael Fetherston, the preferred bidder, near conclusion.

Sources suggest the five-star hotel and golf resort will change hands for about €70 million, which is below the original €80 million asking price.

“It is an ongoing process with a preferred bidder, but no definitive agreement yet,” a spokesman for Smurfit said. “I don’t think it’s too far away, but it’s not sale agreed.”