Europe must show more faith in its economic potential – Lagarde 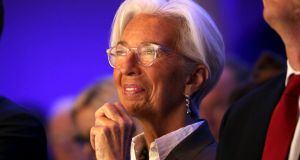 Christine Lagarde: ‘Investment is a particularly important part of the response to today’s challenges, because it is both today’s demand and tomorrow’s supply.’ Photograph: Bloomberg

The euro zone needs to create more of its economic growth at home, including via greater public investment, if it is to withstand weakness abroad and become more balanced internally, new European Central Bank president Christine Lagarde said on Friday.

Ms Lagarde did not discuss monetary policy in her first major speech since becoming ECB president at the start of this month, merely saying the central bank would continue to do its part to support the economy.

Instead, she chose to send a message to euro-zone governments, calling on them to strengthen domestic demand after a global trade war brought a decade of export-driven growth, largely led by Germany, to an abrupt end.

“The answer lies in converting the world’s second-largest economy into one that is open to the world but confident in itself – an economy that makes full use of Europe’s potential to unleash higher rates of domestic demand and long-term growth,” Ms Lagarde said.

Venturing outside the traditional remit of a central banker, she singled out public investment as a key driver of this rebalancing, calling on pan-European funds to be invested in green and digital projects.

“Investment is a particularly important part of the response to today’s challenges, because it is both today’s demand and tomorrow’s supply,” Ms Lagarde said.

“While investment needs are of course country-specific, there is today a cross-cutting case for investment in a common future that is more productive, more digital and greener.”

Her predecessor, Mario Draghi, had long called for greater spending and investment by countries that run surpluses, such as Germany, but was never so specific. His pleas fell on deaf ears in Berlin, however.

The trait angered some other ECB rate-setters, particularly those from conservative, cash-rich countries like Germany and the Netherlands.

“Lagarde meets the expectations that she could become the leading economic and political voice for Europe rather than quickly shaking up the ECB,” said Carsten Brzeski, an economist at Dutch bank ING.

In a symbolic olive branch to the host country of the ECB, Ms Lagarde began her speech by greeting the audience in German and promised to deepen her knowledge of that language.

She had already sought to mend fences with disgruntled policymakers last week, taking the whole Governing Council on a retreat, where they called for more inclusive decision-making.

In her only policy-related remarks, Ms Lagarde confirmed she would “soon” start a review of the ECB’s policy framework, a wide-ranging effort that is expected to involve a redesign of its inflation aim.

She then stuck to the central bank’s pledge to keep the money taps open while monitoring the side effects of its stimulus policies.

“Monetary policy will continue to support the economy and respond to future risks in line with our price stability mandate,” she said.

This well-rehearsed stance places her roughly in the middle of advocates of easy money in indebted southern European countries and policy “hawks” north of the Alps.

“She might have to be more specific following her first governing council meeting in December, but for now the data does not look weak enough for the ECB to make any change to its monetary stance,” said Frederik Ducrozet, a strategist at Picket Wealth Management. – Reuters

1 Pepsi-Cola to build second factory in Cork with potential for 250 new jobs
2 Banks urge borrowers facing hit from new restrictions to engage
3 Covid-19 has shown that much of ‘normal’ life should have been binned years ago
4 Level 5 restrictions risk pushing economy into double-dip recession
5 Find out who tweeted it first
6 Budget 2021 main points: Up to €5,000 a week for Covid-hit firms, hospitality VAT rate cut
7 New hotel planned for Dublin’s Liberties
8 LetsGetChecked and Chargify to create new jobs in Dublin
9 How to avoid a communication breakdown
10 Looking to postpone your tax payment? Revenue sets December deadline
Real news has value SUBSCRIBE