Brexit: Citigroup could move more staff from London to Dublin and Frankfurt 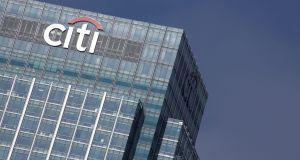 Citigroup could move more staff from London to Dublin and Frankfurt, depending on how clients react to Brexit, the US banking giant’s Europe chief executive said.

“People have made decisions, spent money on platforms that are ready to go but aren’t fully functioning yet because moves have not happened yet,” Citibank Europe chief executive Zdenek Turek said in an interview in Dublin, where the company has 2,500 staff.

“There is an element of cost associated with that, and the same goes for our customers.”

Mr Turek, who took his current role in 2016, suggested the New-York based firm could move more staff out of London to cope with the ripples from the UK’s exit from the European Union, depending on whether clients increasingly shift business out of Britain.

Citigroup is already creating as many as 200 roles in its existing EU locations because of Brexit, with about 60 jobs moving out of London.

Any staff moves will be primarily to Dublin and the Frankfurt-based broker-dealer arm, said Mr Turek. “There is a combination of our own interests and regulatory requirements, and if we have to move more people to support those functions,”he said.

UK prime minister Boris Johnson is fighting for a Conservative majority in next month’s election to push his divorce deal with the EU through parliament, though it’s not clear how long it would then take to negotiate a new trade deal.

UK opposition Labour leader Jeremy Corbyn wants to reopen talks and then hold a referendum to decide whether to implement the new deal that results.

The Liberal Democrats are campaigning to stop Brexit altogether.

Mr Turek welcomed German finance minister Olaf Scholz’s attempt to move ahead on European banking integration, adding that he would like deeper capital markets as well as a banking union. Mr Scholz earlier this month suggested Germany may consider easing its opposition to deposit guarantees, an offer that came with a list of demands aimed at reducing risks in the European banking sector.

“Scholz’s comments were encouraging, but there is still a lot of work to be done,” Mr Turek said. “What was important is it shows that people are now focused on doing something about it.”

“On capital markets union, we should have border-less Europe,” he said. “We would like an Italian company to be able to raise money in the Netherlands or Spain, and would like that to be routine.”

Europe’s banking union “urgently needs deepening” and Germany expects to see the first signs of progress by December in its push to speed integration, according to Mr Scholz’s deputy.

“Our position has just been published so I think we’re still debating a lot of the impulses that we gave,” Joerg Kukies, a state secretary in the finance ministry, said in an interview with Bloomberg Television Friday in Beijing. “The key thing is that there will be progress soon.” – Bloomberg