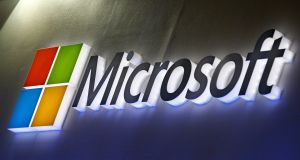 Microsoft has signed a deal to rent three floors of a new office block in the Dublin docklands. The deal for the space at No 3 Dublin Landings, which will accommodate up to 400 workers, is owned by investment company Iput. Photograph: Ritchie B Tongo/EPA

Microsoft has signed a deal to rent three floors of a new office block in the Dublin docklands. The deal for the space at No 3 Dublin Landings, which will accommodate up to 400 workers, is owned by investment company Iput. The deal brings good news for the city’s commercial property sector after Google pulled out of plans to rent office space for 2,000 workers at the Sorting Office development also in the docklands earlier this week, the Sunday Times reports.

Minister for Finance Paschal Donohue was forced into a U-turn on a decision to exclude “proprietary directors” from the pandemic wage subsidy scheme, after conceding to a warning that an orchestrated campaign by TDs and businesses could undermine him in advance of the budget, The Sunday Times also reports.

A new law will ban foreign companies from investing in Ireland if they are found to pose a threat to national security, according to the Sunday Business Post. The legislation, proposed by Tánaiste and Minister for Enterprise, Trade and Employment Leo Varadkar, will allow for the screening of foreign direct investment for potential risks to State security, and comes as the National Cyber Security Centre is detecting a rising number of cyber-attacks from hackers with links to Russia, China, Iran and North Korea, it is reported.

Also in the Sunday Business Post, Michael O’Leary is calling the Government’s handling of the coronavirus travel ban as “monstrously mad”, warning that the State will lose its legal battle with Ryanair due before the High Court on Tuesday. He is calling for the European Commission’s new guidelines for air travel, which will provide for freer movement within the EU and are due to be announced on Wednesday, to be introduced immediately.

An Post takes aim at Revolut with new app

An Post has invested €18 million in its digital banking platform and is preparing to launch a new current account app in October, aiming to rival the popular banking app Revolut, according to the Sunday Independent. An Post Money is hoping to increase its customer base from 250,000 to one million in the next five years.

And finally, for students seeking a flexible yet luxurious accommodation option for college this year, the Radisson Blu St Helen’s Hotel in Booterstown, close to UCD, is offering student rates for this coming academic year, the Sunday Independent also reports. A five-night package in a private en suite room with breakfast and dinner starts at €500, “with the advantage of no long-term leases, flexibility on when you want to be on campus, and within a few minutes’ walk to UCD”.