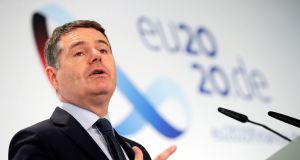 Minister for finance Paschal Donohoe has called for “unprecedented European solutions” that match the unprecedented challenge the continent faces in the Covid-19 pandemic.

After chairing his first eurogroup session in Berlin, the first physical meeting of euro-zone finance ministers since February, Mr Donohoe urged ministers to find the right moment to scale back emergency support measures and begin a return to budgetary and fiscal normality.

He expressed hope that euro finance ministers would seize the crisis to progress reforms to strengthen the euro-area banking sector.

Mr Donohoe told journalists that, while Covid-19 remains a “clear and present challenge to our public health”, he sensed a “shared willingness” for a co-ordinated approach by ministers to get the balance right between sustainable budgetary policy and economic supports.

“Our society does need growth and the right policies to get back on track to create jobs to protect income and to build shared prosperity,” he said. “If we get this right the recovery will be strong and it will reach citizens all the way across Europe. ”

There is a growing recognition, however, that this united approach will become more, not less complicated, in the coming months given divergence among euro area members on infection levels and the duration and nature of support measures.

All were adding to an “uneven, incomplete and asymmetric recovery we have observed in the third quarter after a catastrophic second quarter unparalleled in peacetime”.

She urged euro-area ministers “not to withdraw but phase out some of of the supports that have been put in place and need to remain until the crisis is over”.

“Our accommodative monetary policy needs the support of fiscal policy and none of us can afford complacency at the present time,” she said.

At the same press conference European commissioner for economy Paolo Gentiloni acknowledged that government and European Union supports prevented a bad European labour market situation from being even worse.

Ongoing uncertainty, he said, meant it was too soon to predict when to expect the end of the suspension of EU budgetary rules under emergency provisions.

Economic data showed three stages since the virus reached Europe, he said: a catastrophic April and May, a strong rebound in June and July and a slowing in recent weeks amid local virus flare-ups.

This makes it unlikely that European economies will reach pre-pandemic levels before 2022, he added, with the road there “still paved with uncertainty”. From a European Commission perspective, he said euro finance ministers were compelled to gauge the right moment to move from support measures to the beginnings of budgetary and fiscal normality.

“If we miscalculate the timing of the landing we risk damaging the European economy,” he said.

Their second task, the commissioner suggested, is to learn the lessons of the crisis and complete the outstanding gaps in the bloc’s banking union infrastructure.

This was a fresh call from Brussels for euro members to complement EU mechanisms, established in the euro crisis, to supervise banks or wind them up. Agreement has remained elusive on other joint instruments, such as how to deal with non-performing loans and a common euro-area deposit insurance scheme.

The EU’s co-ordinated response to the pandemic so far, including a €750 billion rescue package, had generated the most positive market mood Mr Regling had seen towards the euro area in 10 years.

“But it is also clear that markets look at unfinished business,” he said, expressing his appreciation that Mr Donohoe will prioritise completing the banking union during his 2½-year term heading the euro group.