Lofty ideals can sound great on paper, but too many struggle to match reality 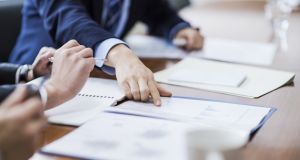 Last week Patrice Caine, the boss of the French defence and technology company Thales, made a dismal announcement.

Thales, whose roots stretch back more than a century, had come up with a statement of its purpose. “It is a statement that took six months to write,” Mr Caine wrote on LinkedIn, adding there had also been six months of consultations with nearly half of the group’s 83,000 employees. The result was just seven words: “Building a future we can all trust.”

Staring at them, I thought, bingo! Thales had pulled off a trifecta in the corporate twaddle stakes. A group that makes everything from train ticket systems to drone software had spent hours of company time on a statement so devoid of meaning that it could have come from untold other firms.

Yet what disturbs most is not just that so many big companies feel the need to produce this guff, it is that their numbers seem to be multiplying.

Data shows no correlation between official values and corporate culture

The more lofty sounding purpose statement has proliferated since the 2008 financial crisis, says André Spicer, a business school professor at City, University of London. He thinks one reason might be the rise of investors keen to back companies that score well on corporate social responsibility charts.

I am all in favour of companies adhering to such things. I don’t mind if they brag about it. What rankles is what has always irked about claims of corporate values: too many struggle to match reality.

“We remain focused on our enduring values of safety, quality, and integrity in all that we do,” Boeing’s chief executive, Dennis Muilenburg, said last year - five months before he was fired in the crisis over two fatal crashes of the company’s 737 Max jets.

“Business integrity underpins everything we do,” says the website of Rio Tinto, the mining group whose chief executive just quit after an outcry over the destruction of two ancient Aboriginal sites in Australia.

No wonder there is so much cynicism about the idea that statements of corporate values, be they purpose, mission or otherwise, can have any effect on performance.

“Mendacity and misrepresentation” were two findings in a 1997 paper by Canadian researcher, Chris Bart, called “Sex, lies and mission statements”. Having asked senior managers from 88 large North American companies about their companies’ statements, he concluded “the vast majority are not worth the paper they are written on”.

Little has improved since, judging from a study of nearly 700 companies published in the MIT Sloan Management Review in July. It also looked at how well employees thought their companies walked their talk on values. The result? Not much, or as the researchers drily put it: “Data shows no correlation between official values and corporate culture.”

Still, neither paper is entirely cynical. Each sees merit in a company that develops distinctive statements, with workers, then spells out what they mean and lives up to them.

Out of curiosity, I rang Thales to ask Caine how he would know if his new purpose statement had worked. “That’s a very good question,” he said. “I really ask this question myself many times.” He said it would take time, though he had been pleased by how many staff said they appreciated the move in the Covid-19 crisis.

But his most telling point was this: work on the statement began long before the pandemic, as Thales was absorbing Gemalto, a company with a more entrepreneurial culture. Asking all employees to think about their common purpose was, he thought, worthwhile. “In fact, the process was as important as the result.”

I give Thales points for at least doing that work itself, instead of paying an ad agency. I can see it might help unify a workforce. As for whether it will make any real difference to what Thales ever does, I’m sorry but I seriously doubt it.