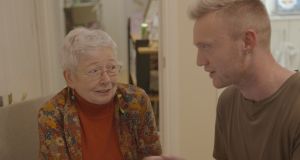 MJ, a 71-year-old recently returned to Ireland from the US, and 23-year-old student Declan help each other find dates in Virgin Media One’s Generation Dating.

Generation Dating, a Virgin Media Television format developed from a staff ideas workshop, has been optioned in Australia after generating interest among buyers at the Mipcom marketplace in Cannes.

The pilot, which airs on Virgin Media One on Tuesday, was made by Coco Content after being developed from an idea pitched by Laura Dowling, a motion graphics designer for Virgin Media Television.

In Generation Dating, two strangers – one older and one younger – get to know each other before being set the challenge of finding the other person a date.

“The idea came from me chatting to my nana about how people met before they had phones,” said Ms Dowling.

In the event, her “what happens when an old person and a young person help each other find love” idea emerged as the one to be developed out of that initial 2018 workshop at the Red Cow Hotel.

Ms Dowling used her day-job experience to create a “sizzle” (a video pitch) that Virgin brought to Cannes, where it attracted the interest of US broadcaster and distributor A&E Networks. Irish production company Coco Content, the maker of First Dates Ireland and Room to Improve, then came on board for the pilot.

At last October’s Mipcom, the format sparked the attention of A&E’s broadcaster clients around the world despite being merely teased as a “coming soon” title.

“A&E said it was one of the hottest properties they had,” said Bill Malone, director of content for Virgin Media Television.

Mr Malone, who is hopeful of further deals for the “uplifting” Generation Dating, is pleased with the number of international partnerships Virgin has struck over the past year from only a “modest investment” on its own part.

This week is a busy one for Virgin, one in which it expects to finalise an agreement with distributor Fremantle for factual format The Great Give Back, made by Motive Television.

The second series of Blood, the award-winning Virgin drama distributed by All3Media International, will be previewed to the press in Dublin, while both Blood and Lisa McGee’s upcoming thriller The Deceived will be showcased in London by All3Media, a company that is 50 per cent owned by Virgin’s ultimate parent Liberty Global.

Virgin has also signed an agreement with ITV Studios to distribute The Guards: Inside the K, a documentary series that will soon air on Virgin, while BBC Studios is the distributor for two of its factual formats, Motive’s First Love and Kite Entertainment’s OAP B&B.

Mr Malone said Virgin had recently signed up US giant Discovery and ITV Studios for another factual format. “It’s a really big inflection point for us,” he said of the flurry of deals, which he believes will have a rising-tide effect on the Irish production industry.

“It has been really cool to be involved in this side of the business,” said Ms Dowling, who worked with mentors and producers in Virgin as her idea was finessed.

“Normally, I am sitting behind a computer.”

As a fan of First Dates Ireland, she was “so happy” that it was Coco Content that brought her idea into existence.

“I knew they would do a really sensitive treatment of the show, and they did really stay true to the original idea,” she said. The cast then “really shaped” the programme, bringing their own stories to it.

At one point, Ms Dowling was standing behind a curtain on set as events unfolded. “I got so into it, it was like I was watching a TV show.”

1 Ryanair and Aer Lingus monitor impact of conronavirus on travel to Italy
2 Bank leaked my loan request to family who tried to rip me off
3 Boris Johnson's new immigration regime will damage much more than industry
4 Mastercard to create 1,200 new jobs by expanding base in Dublin
5 Billionaire Zara founder and German funds vie for prime Dublin offices
6 Google completes purchase of Treasury Building for €120m
7 Nothing beats practice in bid to master public speaking
8 Your business week: Election-hit Bank of Ireland to report results
9 Exposed to coronavirus: How Irish business is coping with fallout
10 No more free ‘croissants’ as Indo readers asked to hand over the dough
Real news has value SUBSCRIBE

Ryanair and Aer Lingus monitor impact of conronavirus on travel to Italy 18:07
Your business week: Election-hit Bank of Ireland to report results 18:00
Mastercard to create 1,200 new jobs by expanding base in Dublin 16:23
Bank leaked my loan request to family who tried to rip me off 16:00
Boris Johnson's new immigration regime will damage much more than industry 13:52
Search executive
jobs on irishtimes.com