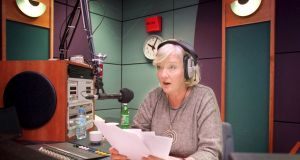 Radio 1 recorded a rise in listenership in the final quarter of 2019, with Marian Finucane adding to her audience in her last months on air, new radio figures show.

The Joint National Listenership Research (JNLR) data for the 12 months of 2019 shows that Finucane, who died early last month, had 309,000 listeners on a Sunday. This was up 19,000 on the previous survey, which covered the October 2018 to September 2019 period.

Her Saturday audience of 341,000, though down 2,000, meant hers remained the third most listened to programme on Irish radio, behind Radio 1’s Morning Ireland and Liveline, the call-in show originally hosted by Finucane.

The presenter was the biggest draw on Radio 1’s weekend schedule, which is unusually popular compared to others in the radio industry.

“The truth of it is we are never going to be able to replace Marian,” said Tom McGuire, the head of Radio 1.

Brendan O’Connor, who had filled in for Finucane in the latter weeks of 2019, has presented Weekend on One since her death. He will be followed in the slot by Sarah McInerney for a number of weeks, Mr McGuire said, before a new show “building on the strengths Marian has given us” is announced in March or April.

On the weekend, Sunday with Miriam presented by Miriam O’Callaghan made gains, adding 29,000 listeners in the quarter to 265,000, another highlight in a survey that saw Radio 1 extend its market share to 22.6 per cent, up from 22 per cent.

Newstalk’s key weekday peak-time shows all lost listeners compared to the last survey. Ivan Yates’s Hard Shoulder remains its biggest show, with the audience for the drivetime programme 11,000 higher than where it was a year ago, but down 1,000 in the quarter, at 181,000.

There was little change on Communicorp’s other national station Today FM. Its weekday shows posted modest gains with the exception of its biggest one, the Ian Dempsey Breakfast Show, which saw its listenership drop 3,000 in the quarter to 174,000.

Today FM now has a market share of 7.4 per cent, while Newstalk has 6.5 per cent, both down slightly.

RTÉ 2fm’s market share was flat at 6.4 per cent, but it added listeners aged 15-34, according to the head of the station, Dan Healy. Its notable performer was the breakfast show, which added 7,000 listeners and now has an audience of 142,000.

The programme, normally presented by both Doireann Garrihy and Eoghan McDermott, was hosted by Garrihy either on her own or alongside Love Island winner Greg O’Shea in the final months of the year while McDermott was away working as the narrator of Love Island Australia.

Mr Healy paid tribute to the late Larry Gogan, who died in January having worked for 2fm from its inception in 1979 until 2019.

“He was absolutely adored, just a gentleman, and very supportive of everybody who walked through the door,” he said. “We were all very lucky to work with him and get to know him.”

Some 81 per cent of people listen to the radio on an average day, according to the JNLR, for which research firm Ipsos MRBI interviewed 16,900 people. Among 15-34s, the percentage of people who listen daily is 71 per cent.

In Dublin, the Wireless Group-owned FM104 retained its 11.5 per cent share, while Communicorp music station 98FM now has a 6.5 per cent share. In Cork, Wireless station 96FM saw its market share rise to 22.9 per cent, though sister station C103 lost ground and now has a share of 12.8 per cent. Red FM, in which The Irish Times has a minority stake, slipped to 21 per cent.

WLR FM, which is majority owned by The Irish Times, saw its share of listening in Waterford rise to 47 per cent, while youth station Beat 102 103, also part of The Irish Times group, nudged down to a 15.1 per cent share in the south east.

Donegal’s Highland Radio remained the local station with the largest market share in its licence area at 67.6 per cent.

*Changes shown are compared to the last survey, which took place between October 2018 and September 2019.

1 Suspicions rife as key Brexit trade talks begin in Brussels
2 Corona beer firm reeling after 8% slide due to coronavirus
3 Irish companies restrict travel over coronavirus fears
4 Life as a Facebook moderator: ‘People are awful. This is what my job has taught me’
5 How well paid do you think you are? Here’s how to work it out
6 ‘The only time apartments were viable was in . . . Ballsbridge, Killiney and Dalkey’
7 We have little chance of building enough homes to meet election promises
8 Coronavirus: Iseq down 11% in five days as global sell-off is worst week since 2008 crisis
9 Bank leaked my loan request to family who tried to rip me off
10 Postal worker takes damages action against An Post over ‘tiger’ kidnapping
Real news has value SUBSCRIBE