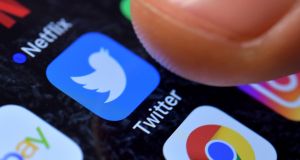 Twitter’s quarterly revenue topped $1 billion (€908,819) for the first time in the final three months of 2019, beating Wall Street’s estimates, as its audience jumped by more than a fifth.

Shares in Twitter rose by as much as 9 per cent to above $36 in pre-market trading in New York on Thursday, as investors breathed a sigh of relief that there was no apparent repeat of the technical bugs that hit ad sales in its previous quarter.

Jack Dorsey, Twitter’s chief executive, said product improvements, such as changes to its timeline and notifications, had driven a 21 per cent rise in monetisable daily active users, to 152 million in the fourth quarter of 2019.

“Entering 2020, we are building on our momentum – learning faster, prioritising better, shipping more and hiring remarkable talent. All of which put us in a stronger position as we address the challenges and opportunities ahead,” Mr Dorsey said.

Revenues rose 11 per cent year on year to $1.01 billion, at the high end of its own forecasts, driven by strong growth in the US, where average monetisable daily active users grew by 15 per cent to 31 million.

However, net income fell by 12 per cent in the quarter to $119 million, after adjusting for an income tax benefit a year ago, as costs and expenses rose 22 per cent to $854 million.

Twitter warned that those costs would continue to grow this year, as it predicted a 20 per cent increase in staffing, especially in costly areas such as engineering, product development and research. It also plans to build out a new data centre later this year, contributing to predicted capital expenditures of up to $825 million.

Revenues for the first quarter of 2020 would be between $825-885 million, Twitter forecast, compared with analysts’ estimates that had previously been around $870 million.

Twitter said it had shipped fixes to the third-party measurement problems and had “made progress” on developing a new mobile application promotion tool, both of which had caused issues in the previous quarter. – Copyright The Financial Times Limited 2020