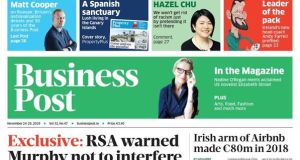 Business Post rebrand: The 30-year-old paper has a new name, a newish owner and one startling ambition.

The newspaper has marked the 30th anniversary of its first edition by dropping the “Sunday” bit from its masthead, though its owner of a year, the genial and ambitious Enda O’Coineen of Kilcullen Kapital Partners, assures us that the title will still be published in print form every Sunday.

The decision to change the name was “not taken lightly”, new editor Richie Oakley told readers at the weekend.

Equally it’s a move that has been foreseeable for almost a decade, going back to decisions taken by its ex-ex-owners, the one-time media empire Thomas Crosbie Holdings (TCH). It is now eight years since TCH put the main newspaper content of the Sunday Business Post behind a hard online paywall while also launching what it called the Daily Business Post, a free service on the Sunday-less website BusinessPost.ie.

Before this, the company operated a policy, odd even then, of delaying online publication of the newspaper until Monday in order to protect its Sunday print circulation. As readers’ consumption preferences shifted inexorably to the digital form, it was no longer either wise or possible to take such artificial steps to stem the falls in print sales – not if it meant stymieing the development of a modern digital product.

At the time of the new measures (November 2011), the Irish newspaper market was already four years into its consistent trend of decline and the title’s print circulation stood at almost 48,000. In the first half of 2019, the most recent period for which Audit Bureau of Circulations (ABC) data is available, it was 25,740.

The Business Post has been through a few wars in its third decade. Its biggest crisis came in 2013, when Cork-based TCH went into receivership and the newspaper was placed in examinership. Just two years after the collapse of the Sunday Tribune, this was a highly worrying period for Irish news media.

The paper was then bought by investment company Key Capital and Paul Cooke, a former executive with the Irish Daily Star, who subsequently served as the Sunday Business Post’s managing director. Cooke exited this role and sold his shareholding in 2016, while two years later, Key Capital managed to sell the title onto Galway businessman and round-the-world sailor O’Coineen.

Kilcullen’s Colm O’Reilly is now the chief executive, while former Times Ireland editor Oakley was appointed as the permanent replacement for Ian Kehoe, who left at the time of the sale to set up new digital business media outlet The Currency alongside his former deputy Tom Lyons.

The rebrand of the (Sunday) Business Post is the most significant change O’Coineen has made so far, but other than the absent “Sunday” – and indeed the “The” is gone too – there wasn’t a lot to be gleaned about the company’s future direction from last weekend’s edition.

The newspaper, which has kept its cover price of €3.40, has been the subject of some design tinkering rather than a radical new look, with the lightening of the green on the block colour of the masthead the most obvious difference.

Oakley advised readers that the title’s new website and mobile app would allow it to “produce more quality journalism throughout the week”, making a subscription “even better value”.

O’Coineen, who now also owns magazines such as Irish Tatler and Food & Wine through Business Post Media Group, remains in teasing watch-this-space mode with regard to the title’s future plans, though like many owners of media – especially magazine media – before him, he seems keen on events businesses as a potential revenue-generator for the brand.

He did reveal one incredible aspiration in an interview with Katie Hannon on RTÉ’s The Business: to grow the title’s digital subscriber base from what he said was now about 5,000 to a bold 100,000.

“Your target is to go from 5,000 to 100,000?” Hannon repeated back to him with an appropriate hint of incredulity. “Why not?” said O’Coineen, before going on to mention the globe-conquering New York Times as a role model. O’Coineen sees no reason why the Business Post can’t expand outside Ireland. “We are not hemmed in geographically,” he said.

Still, to amass 100,000 subscribers would require it to rack up international subscribers at a rate that no Irish news title has done before. Even with New York-based diaspora specialists Irish Studio on board as minority owners, it seems optimistic, or as the industry parlance has it, challenging.

But then some might say that buying a newspaper, any newspaper, and expecting it not to lose money is optimistic. When Hannon asked him if this was in fact “the definition of madness”, O’Coineen declared he had “every aspiration to sanity”. On that basis, anyway, this relative newcomer to the Irish media should fit right in.

Oxford-AstraZeneca vaccine may be trialled again after uncertain results