Seen & Heard: Overcharging at PTSB and Ulster Bank, Fitbit’s Irish profits, and the fallout from the collapse of Orla Kiely’s retail empire in the US also make the headlines 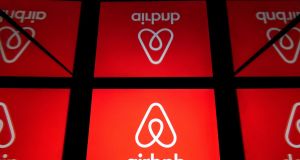 This picture taken on November 22nd 2019, shows the logo of the online lodging service Airbnb displayed on a tablet in Paris. Photograph: LIONEL BONAVENTURE/AFP via Getty Images

An Irish-registered unit of Airbnb made a profit of €80 million last year, the first time profit information about the accommodation platform’s business here has been detailed, reports the Business Post.

The newspaper, which rebranded from the Sunday Business Post today after 30 years under its previous masthead, said the profit generated by Airbnb International Unlimited Company compared with a loss of nearly €72 million in the previous year.

The data has become available as a result of a change in Irish company law that now requires businesses with unlimited liability status to file details of their finances.

Permanent TSB and Ulster Bank are examining how they may have overcharged hundreds of customers with mortgage arrears, reports The Sunday Times.

This follows the revelation that EBS has overcharged an estimated 500 households by wrongly charging them interest on missed insurance payments after they defaulted on their loans.

The issue is emerging as the Central Bank of Ireland prepares to levy multimillion-euro fines on all banks over their roles in the last banking scandal, concerning tracker mortgages.

Irish data centre company Enginenode has applied for planning permission to build a data storage campus near Bracetown, Co Meath, believed to involve an investment of hundreds of millions of euro, according to The Sunday Independent.

The company was set up last year by Jason O’Conaill, Eir’s former head of data centres and founder of Amazon Web Services Usergroup Ireland, and Ronan Kneafsey, a former managing director of telecoms and data centres at Eir.

The 60-acre site is near a data centre owned by Facebook in Clonee.

An Irish subsidiary of Fitbit made a $346 million (€308 million) profit last year by disposing of intellectual property (IP) that had been previously valued at just $50 million, reported The Sunday Times.

Fitbit Holdings, based in Dublin, sold the IP to an unidentified sister company also owned by the US fitness tracker firm. More than $70 million was earned by the company in 2018 from licensing the rights to its IP to Fitbit sellers in all parts of the world outside the US. This revenue ceased in November 2018 following the IP sale.

The study reviewed the direct and indirect economic impact of the home of the Benedictine Order in Ireland and its Victorian Walled Garden. Some 1,550 jobs are supported in the region as a result of the attraction, which draws 562,000 visitors a year.

The US arm of the Orla Kiely retail empire amassed liabilities of $4.5 million, including more than $700,000 owed to its Manhattan landlord, US bankruptcy documents show, according to the Business Post.

Kiely Rowan plc collapsed last year with debts of more than €8 million. US bankruptcy trustee Deborah Piazza has determined that the US operation, Kiely Rowan NY Inc, has no assets to liquidate to the benefit of its creditors. The bankruptcy case is expected to close soon.