Vikings spin-off Valhalla to be filmed for Netflix in Wicklow 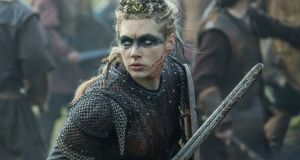 Lagertha (Katheryn Winnick) in the original series of Vikings

An “explosive next chapter” of the now-finished television series Vikings is to be filmed at Ireland’s Ashford Studios following Netflix’s decision to commission a new iteration of the show.

Vikings: Valhalla, which will be made for Netflix by MGM Television, will count Irish film producer Morgan O’Sullivan among its executive producers and will continue the relationship between Vikings and the Co Wicklow studio.

Netflix has ordered 24 episodes of the new series.

The original Vikings, created by Michael Hirst, was commissioned by Canada’s History Channel and shot at Ashford, owned by Wicklow entrepreneur Joe O’Connell, between 2012 and 2018. It was announced that the sixth series, which wrapped at Ashford a year ago and is due to air in Canada from December, would be the last.

However, in a boost for Ashford Studios, the new Vikings project has now been confirmed by MGM and Netflix. Vikings: Valhalla, written by Jeb Stuart, will begin 100 years after the conclusion of the original story and will focus on the adventures of Leif Erikson, Freydis, Harald Hardrada and the Norman king William the Conquerer.

Its heroes and heroines will “blaze new paths as they fight for survival in an ever-changing and evolving Europe”, Netflix said.

Mr Hirst is the British screenwriter and producer who previously created The Tudors, which was also filmed in Ireland.

He said it was “a particular joy” for him and Mr O’Sullivan that Vikings had been able to benefit from the State’s support for television drama to create employment for hundreds of film industry workers here.

“Making a great show isn’t a mechanical activity, it’s a human one,” he said.

Steve Stark, president of television production and development at MGM Television, which also makes The Handmaid’s Tale for Hulu, said he was “thrilled” to be partnering with Netflix on Vikings: Valhalla, which he described as “a labour of love for everyone involved”, while Netflix’s vice-president for original series, Channing Dungey, said the series “promises to be everything that fans love about the franchise”.

Netflix’s other activity in the Irish industry is headed by My Father’s Dragon, which it has commissioned from Cartoon Saloon and will be directed by the Kilkenny animation company’s Oscar-nominated director Nora Twomey.

The Netflix young adult series Fate: The Winx Saga also began filming at Ardmore Studios in September, while Christmas film The Knight Before Christmas, which will be released on its platform this Friday, was partly shot at Charleville Castle.