Lionel Barber to step down as Financial Times editor

Deputy editor Roula Khalaf to take up role, as Barber ends 34-year career at the paper 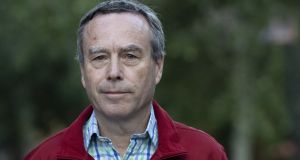 Lionel Barber is to step down as editor of the Financial Times, ending a 14-year tenure that put the newspaper on a profitable footing even as its traditional print business was upended.

He will be replaced by Roula Khalaf, the FT’s deputy editor since 2016. “Am thrilled to be appointed the next FT editor. What a privilege to follow the great Lionel Barber,” Ms Khalaf tweeted.

In an email to staff on Tuesday, Mr Barber announced his 34-year career at the paper would end in January when he leaves “the best job in journalism”.

“When I took over as editor, I pledged to restore the gold standard in the FT’s reporting and commentary, and to help the board to build a sustainably profitable business,” he wrote, adding the responsibility had been “a rare privilege and pleasure” during “tumultuous times”.

During his tenure, Mr Barber oversaw the shift away from print advertising that underpinned the FT’s business for more than a century, building a digital publishing strategy and developing a readership of more than 1 million subscribers.

The FT also came under new ownership in 2015 after it was bought by Nikkei Group, Japan’s biggest media organisation, for £844 million (€981 million) from Pearson, which had been its home since 1957.

Tsuneo Kita, chairman of Nikkei since 2008, described Mr Barber as “a strategic thinker, true internationalist and great friend of Nikkei”.

“He has transformed the FT newsroom into a world-class digital-first operation, producing a unique combination of deep, original reporting and powerful commentary. FT journalism has never been stronger,” he said.

“Lionel and I have built personal trust over the last several years; it’s very sad to see him leave the FT. However, both of us agree it is time to open a new chapter.”

Mr Barber started his career as a business reporter at the FT in 1985, following stints at the Scotsman and the Sunday Times. He served as Washington correspondent, Brussels bureau chief, news editor and US managing editor. – Copyright The Financial Times Limited 2019

How Argentina and its creditors thrashed out a $65bn deal 13:01
New home completions drop 32% in second quarter 12:47
Hairdressing 7% more expensive in July as prices declined across economy 12:26
47,000 homes need to be built each year to solve housing crisis, report says 12:00
Lenovo sails past expectations with 31% first-quarter profit jump 11:05
Search executive
jobs on irishtimes.com