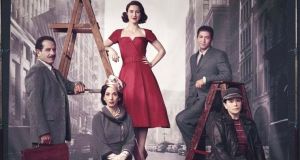 Eir is to offer a free year’s subscription to the Amazon Prime Video streaming service to new and existing customers of its Eir TV platform.

Amazon Prime is a rival to Netflix that includes original productions such as The Marvelous Mrs Maisel, The Man in the High Castle, Good Omens and Transparent, as well as access to films and programmes from other sources.

“The addition of Prime Video for our Eir TV customers ensures customers can enjoy a world of infinite entertainment all in one place, on Eir TV,” said Susan Brady, the company’s managing director of marketing.

Amazon Prime Video usually costs €5.99 per month. Customers will get the first 12 months for free with Eir and will then be automatically enrolled into a monthly payment plan for the service unless they choose to cancel it.

Eir TV is available as a special offer from €14.99 per month for six months currently, which rises to €19.99 thereafter.

Amazon’s Prime video service has been available locally since December 2016. It is available as a standalone subscription of €2.99 per month for the first six months and €5.99 per month after that. Subscribers also enjoy certain benefits when ordering goods online with Amazon that are unavailable with Eir’s offer.

Eir’s offer comes as the streaming wars heat up with the new Disney+ service, which launched this week, reaching over 10 million sign-ups on its first day. This is despite it only being available currently in North America and the Netherlands. The service is expected to go live here early next year.

It also follows on from the launch of Apple’s own streaming service, which went live last week. It costs €4.99 per month for Irish subscribers after a seven-day free trial.

Meanwhile, Netflix, which has close to 160 million subscribers globally, is still proving popular locally with a ComReg survey published last year estimating that the service was being used in more than 500,000 Irish homes.